Ever After High Wiki
Register
Don't have an account?
Sign In
Advertisement
in: Characters, Males, Wonderlandians,
and 3 more

All of my Wonderland friends, from Madeline Hatter to Bunny Blanc.

Alistair Wonderland is a 2015-introduced and all-around character. He is part of Alice's Adventures in Wonderland and Through the Looking-Glass, and What Alice Found There as the next Alice, and he is currently a student at Ever After High. He was stuck in Wonderland before traveling with Bunny to Ever After, where they are currently staying with the rest of the Wonderlandians. In the destiny conflict, he is on the Royal side for the sake of his future adventures and riddles as the next Alice. Already disappointed by Wonderland's closure, Alistair is determined to ensure that his pursuit of his destiny is safe at Ever After High, where he can learn and take in more experiences of the curious world around him.

In English, Alistair is voiced by Robbie Daymond.

Alistair loves a good riddle and is very witty. Sometimes he can get a bit overconfident with himself, calling himself a 'riddle master', but is selfless, brave and well-rounded in character either way. Like all of the other Wonderlandians, Alistair shows that he misses Wonderland a great amount. As such, he has a tendency to get haunting flashbacks about when he faced the Evil Queen and stayed back with Bunny Blanc.[1] His birthday is revealed on Facebook to be May 12th.[2] He is very kind to Ever Afterlings, also. Like his mother Alice, Alistair is very curious.

Alistair has semi-long, messy white-blond, and dark blond hair, bright blue eyes, bangs and peach-colored skin. His signature, 'Signature - Royals' outfit has him wearing a dark bright blue rolled-up-sleeved, or mid-quarter-length sleeved shirt with patterns on it such as clocks, Queen of Hearts cards designs, pocket-watches, teapots and many other patterns and designs. He also has light blue at the cuffs resembling denim, light tan pants and dark brown boots. He usually wears a brown water canteen around his waist and in the webisodes, a tan backpack. In the webisodes, Alistair wears a brown, chained necklace. In the webisodes, he lacks the canteen.

Still new to the customs of Ever After, Alistair explores for the sake of knowledge. He finds fun in adventuring and getting to know more about whatever he's interested in. As a thinker, he's started a chess club but he and Bunny are currently the only two members.

Main article: Through the Looking-Glass

His mother is the titular Alice from Alice's Adventures in Wonderland and Through the Looking-Glass, and What Alice Found There. Like his mother, he wants to explore Wonderland and, solve riddles. Despite Alice's background herself as his mother, Alistair is biologically related to Wonderland; because of the fairytales going one after another in destiny, especially in Ever After. In Wonderland, or Wonderland, people are all mad and Alistair embraces that. Alistair's mother was brought up in Lizzie Hearts's diary (Lizzie Hearts's 'Signature - Royals' diary), where Lizzie herself said about Ever Afterlings "what a bunch of Alices".

Alistair cites Bunny Blanc as being his best friend since the first time they met. He's also close with all the students from Wonderland, as he defines specifically: "All of my Wonderland friends, from Madeline Hatter to Bunny Blanc."

Alistair has strong feelings for Bunny, but thinks she only sees him as a friend. He's typically defensive when other boys talk to her. This changes in the Carnival Date line.

Alistair is also the crush of Courtly.

Alistair is an incredible problem-solver and can crack almost any code. 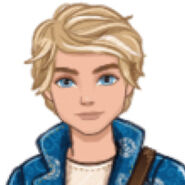