Apple White is a 2013-introduced and all-around character. She is part of "Snow White and the Seven Dwarfs" as the next to become Snow White, and she is a student at Ever After High. In the destiny conflict, she is on the Royal side and is the leader of them because she believes strongly in destiny and has worked hard to follow tradition.

In English, Apple White is voiced by Jonquil Goode.

As the next Snow White, Apple takes every bit of her future role to heart. Fulfilling the role of the generous, kind, and good-natured queen to perfection, she is no doubt the best suited to her destiny. However, despite her celebrity status among the other students, Apple is just as much human as the rest of them. When everything Apple has ever known is threatened with falling apart, she takes it upon herself to lead the Royals and become an inspiration to all to preserve destiny in the Fairy Tale world, for better or for worse. Although appearing self-centered and apathetic towards those with less prestigious destinies than herself, Apple's crusade comes from a place of genuine concern and benevolence for her friends, not wishing to see them "go poof" or be subject to the chaos that could happen if no one followed their destinies as they should.

Despite the divide in the school, however, Apple still considers Raven Queen one of her best and most treasured friends. Although she wanted Raven to follow her destiny, and her attempts to convince her to could be badgering and vexatious, she wants her to do so from a place of genuine commitment, and refused to resort to deception or unsavory tactics. In the midst of it all though, Apple's love for Raven, and her other friends, prevailed over her childhood fear of an unpredictable future. Though she still wants her own happily ever after, she now considers her friends' happiness and futures as individuals more important than the controlled world she grew up in.

At her core, Apple is hard-working and and dedicated to her future. She's intelligent, believing in rational thought and logic to contrast and compliment with Raven's abstract creativity, and an effective leader. Albeit a bit vain, she has a big heart and is loved by all for good reason. Her gracious and kind-hearted nature has secured her spot as the fairest one of all, and she upholds that title with the grace and dignity fit for a future queen.

Apple has bright blue eyes and her mother's characteristic pale white skin and red lips, but lacks the ebony-black hair and instead sports blonde curls. A noteworthy material included in most of Apple's wear is lace and the color red, which symbolizes apples. She normally wears bright, metallic or simple colors. Though she needs to wear glasses, Apple usually doesn't.[1]

Good-natured and benevolent as ever, Apple devotes much of her free time to helping those in need. Community service is a pastime for her, and she frequently uses her princess status as a platform for her charity work. Appealing for better institutions, saving the lives of animals, and bettering her community is just all in a day's work for Apple. This extends to her school life as well, where she works as Royal Student Council Co-President with Madeline Hatter.

Apple also enjoys delving into her studies, putting her consistently at the top of her class. She's especially good with classes that revolve and science and logic, as rational thought and order come naturally to her. In addition, she's been shown to enjoy singing, her voice having an almost magical effect on "boys and animals". Her talents still don't end there, as she's also been shown to be a skilled dancer, chemist and orator.

Apple White is the daughter of Snow White and her fairytale prince, who is now a king. She seems to have a good relationship with her parents. It is shown that her mother is very competitive and expects nothing but perfection from Apple, no matter the price. Snow White puts lots of pressure on Apple to be the best in every aspect.

According to "Fairy Tail Ending", Apple has an aunt who creates wild stories about her travels. This aunt is not confirmed if she's from her mother's side or from her father's.

Her best friend is Briar Beauty, and she's also close with Ashlynn Ella and Blondie Lockes. Apple shares a dorm room with Raven Queen through her own request. She hoped that by getting to know her better, she could change her mind about her destiny. But in ''Way Too Wonderland'' she admits that Raven's heart is too good for evil, and should be free to write her own destiny. She is loved by nearly everyone and is especially close to the Royals. She and Raven seem to be close with a comet alien called Astranova, who recently transferred to Monster High.

In The Secret Diary of Apple White, Apple and Faybelle Thorn become friends after serving detention together. Faybelle showed that she really liked Apple and even planned a secret party for her after Apple is banned from attending a dance.

In "Dragon Games" she is chosen by a dragon whom she calls Braebyrn.

Apple's destiny was to originally lead to her marriage to Daring Charming, though they only saw each other as friends in the meantime. There are times when Apple has been seen attracted to or flattered by Daring such as in the episode Save Me, Darling. While they are not exclusive with each other, they do tend to engage in couple-like behavior such as going to the multi-hex theater together. When Blondie asked them about their relationship, Apple replied, "This is high school, we've got forever after to be together".

Despite her destiny, there are enough boys at Ever After High with a crush on her and who flirt with her. In "Apple's Tale: The Story of a Royal", Tiny and the son of the Hero of Haarlem both expressed a crush on her, with Tiny offering to carry her books. In "Raven's Tale: The Story of a Rebel", a boy attempts to give her a flower, which she reacts positively to. Apple is usually flattered by the attention and has stated in her profile that she uses her charms to have boys come to her rescue when she needs it.

In "Dragon Games", Apple is poisoned by the Evil Queen and falls into a cursed sleep, traditionally only to be awoken by true love's kiss. When Daring tries and fails to wake her, he concludes that he is not her fairy tale prince after all, and therefore not Apple's true love. Instead, Darling Charming performs CPR to awaken Apple due to the Apple being lodged in the throat. This could possibly mean that Darling Charming is Apple's destined princess charming. However, because it was CPR that was performed and not an official "true love's kiss", nothing has been made clear as of yet as to whether not this was an act of heroism or true love.

With her powers of charming, Apple can literally hypnotize anyone with her looks to do a good deed. She can also summon any good magical creature or regular animal to aid her. 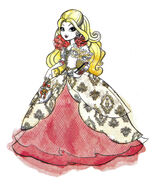