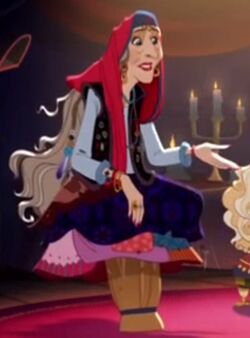 Baba Yaga is a witch/sorceress and one of the most iconic figures in Slavic folklore, appearing in many tales and in various roles. She is a faculty advisor at Ever After High and sometimes teaches General Villainy along with Mr. Badwolf. She is also the department head for Spells, Hexes, and General Witchery classes. Though she tends to go along with Headmaster Grimm's views on destiny, she has sympathy for the Rebels and helps them in small ways, particularly Poppy, who expresses interests in both sides, although Raven is sometimes pushed to be wicked. She is very wise and uses her magic to help resolve conflicts.

The advisor to dark magicians, Baba Yaga has a withering stare and frightening cackle. She is a powerful sorceress in her own right, yet she corrects behavior with a squirt from a spray bottle (especially to Raven Queen when she refuses to be evil), as shown in the novel "The Storybook Of Legends". She agrees with Milton Grimm's views on destiny, though is more patient and less rigorous about it than he is.

Madam Baba Yaga has long wiry grey hair, grey eyes, and peach skin. She wears a lot of jewellery on her body and feathers and bones in her hair. She wears a red scarf around her head, she has a dress on that has patch work along the skirt, she wears a black vest, and has long pale purple nails.

Baba Yaga is a witch from Russian folklore, who is said to be very old with teeth made of sharpened iron, since she is supposedly a cannibal and these help her chew through bone. She lives in a shack on top of chicken feet (which moves the home around) and flies around in a chimney (or a mortar). Fairytales regarding Baba Yaga vary; in some myths she is a villain, in others a much needed aid to the protagonist.

It is confirmed by Dexter that pop celebrity Lady Yaga is her niece.[1]

As a witch, she can cast spells and curses. She is able to levitate objects. 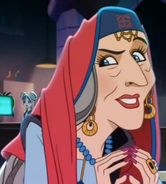 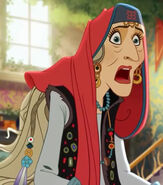 Add a photo to this gallery
Retrieved from "https://everafterhigh.fandom.com/wiki/Baba_Yaga?oldid=104008"
Community content is available under CC-BY-SA unless otherwise noted.