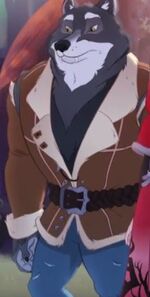 Mr. Badwolf, also known the Big Bad Wolf is a teacher at Ever After High, he teaches General Villainy. Though he is meant to be the antagonist of Little Red Riding Hood, he and his wife Red Riding Hood learned to get along in secret, as the two being ones of the first Rebels in the Fairytale World of Ever After.

In English, the Badwolf is voiced by Joe Sanfelipo.

In Latin American Spanish, he is voiced by Andrés García.

Mr. Badwolf is supportive of evil deeds by the appropriate students, but he does urge them to keep to the school schedule. However this might be a cover up since his daughters destinies would result in Cerise being eaten by her sister and Ramona being killed in order to save her life.

In his human form, Badwolf has dark hair, slightly graying and dark yellow eyes. In his wolf form, he has gray fur and darker patches of fur on his hands and collarbone area. His appearance is properly different in the Shannon Hale books and probably different from Shannon Hale's, books appearance in the Suzanne Selfors books.

Mr. Badwolf is the husband of Red Riding Hood and the father of Cerise Hood and Ramona Badwolf. It goes against his and Red's story for them to fall in love, but they did. They kept their marriage a secret and as a result, no one knows that Cerise is Badwolf's daughter. Under his name, Ramona Badwolf is his daughter and will be the Big Bad Wolf, or as the Shannon Hale books calls, Big Badwolf, but since where she stands in the destiny conflict is still unknown, it's unknown if she doesn't want to follow her father's destiny - as in, if she's a Rebel.

Before becoming Red's husband, it was apparent that back in his younger years as a student at Ever After High, he had a crush on the Evil Queen. It had also been hinted that Red had feelings for him back then as well, though he probably didn't reciprocate them until after their story started.[1]

However, the book "The Class of Classics", directly contradicts this, portraying him as crushing on an uninterested Red before gaining her attention and affection by writing a play with her as a class assignment.

Mr. Badwolf growls at Hunter Huntsman, to Hunter's dismay. Along with Red Riding Hood, he meets one of his daughters, Cerise Hood in the Enchanted Forest where they commence their picnic, but they get interrupted by Hunter. Staging an act, Badwolf flees, but returns after Hunter is gone. Cerise's Picnic Panic

Badwolf watches the sporting events at the bleachers. Tri-Castle-On

Badwolf is seen dancing to Melody Piper's music to the country music beat. Piping Hot Beats Mr. Badwolf begins to talk to Ramona about the importance of getting along, but Ramona just says "Talk to the paw, Dad" and leaves. Meanwhile, in Grimmnastics class, Cerise is getting asked by Blondie Lockes about whether or not Cerise had Ramona sent to a reform school in the Dark Forest, which Cerise responds 'no comment' to. Ramona busts Cerise's volleyball, and Gingerbreadman calls her to the headmaster's office. Ramona walks over to Cerise and tells her she'll see her after school. Ramona leaves and Blondie announces to the school see a battle between the two after school. After that, Cerise pulls off a poster in the hall and says it's ridiculous and says that she thinks she, the latter and Ramona can solve their own problems. Ramona says she agrees and asks if Cerise accepts her challenge. Cerise accepts and says "Let's settle this right now." Badwolf finds them about to fight and calls them both into his classroom. In the classroom, the latter is very upset with them both, and both his daughters say at the same time: "Dad! She started it!". Ramona complains in these words: "Oohhh, mysterious secret! Look at me, I'm a hood!". Cerise says she's not doing it for herself and calls Ramona mean. Badwolf scolds them and says how important it is to keep the family secret. Ramona says "I know, I know, if anyone knew that Big Bad married Little Red." Then Cerise says they would flip their crowns. Mr. Badwolf says that's right so until graduation, their family should remain a secret. "Now, let's give the public a real competition!" he says. Then at the Grimmnastic race game, Ramona asks Cerise: "You ready for this, sis?" and Cerise says: "Oh yeah!" and then they run off. A Big Bad Secret!

Badwolf teaches General Villainy and gives Raven an F grade. He overhears Mira's conversation with Raven, who suggests cheating and cursing him to give her top grades all year-round. Instead of telling her off, he supports Mira's behavior. Later on, he is trying to escape from the thorns unleashed by the Evil Queen, his daughters save him. Dragon Games

Badwolf arrives home and finds Raven and Cerise with Red Riding Hood. He is proud of Cerise because she won the trial, holding ten baskets. The Unfairest of Them All He teaches General Villainy to a new class of students, but because Badwolf is disappointed with his students' lack of interest, he gives a one-week assignment which enforces the students to compete against each other to see who is the baddest. The winner of the contest gets the only A grade for the assignment and a reward from Mr. Badwolf's treasure vault. Throughout the week, Mr. Badwolf judges each of his students' assignments and grades them as either passing or a fairy-fail. Next Top Villain It's shows how Red Riding and Big Bad Wolf started to date. The Class of Classics