Blondie Lockes is a 2013-introduced and all-around character. She is the daughter of Goldilocks from The Story of the Three Bears (also known as The Three Little Bears) with her destiny being the next Goldilocks and she is a student at Ever After High. In the destiny conflict, she is on the Royal side, because she wants to fit in with the royal crowd and keep their respect. In general, this seems to work. Most Royals treat her as one of their own, even if they are annoyed by her insistent push into their group. Blondie is oblivious to this and continues to think she has to prove herself to her friends. One of the ways she makes herself a big persona at Ever After High is her MirrorCast news show, which even the teachers watch.

In English, Blondie Lockes is voiced by Julie Maddalena Kliewer.

Blondie is the archetypal high school socialite - she's charming, she's congenial, and she has high standards. But there's just one problem; Blondie lacks the prestige of royalty and thus feels all the more excluded from what she considers a clique of princesses. Wanting nothing more than to feel like a member of the big leagues, Blondie tends to exaggerate (read: lie) about her fairy tale heritage, at one point insisting that she was a princess herself. Despite the fact that these mostly fall on deaf ears[1], Blondie nonetheless remains a pretty well-known student at Ever After High. She runs a school vlog called Just Right from her MirrorPad, where she becomes a primary source for news, exploits and gossip. She also has a dear love for nature she gets this from her mother who was always exploring in the forests.

Blondie is also known for her tendency to nitpick and criticize seemingly insignificant details due to her wanting everything to be "just right" - her personal lingo for "perfection". Everything from the foods she eats to the mirrors she uses has to meet every ridiculous standard, changing just as easily as her mood. In addition, Blondie also has become infamous for her lack of regard for other people's items or space, to the point of stealing stuff from her friends and completely disregarding their privacy, something she does easily thanks to her ability to unlock any locked door. However, she isn't malicious and just has a genuine lack of knowledge of her friends' boundaries and social cues.

As her name implies, Blondie's most noticeable feature is her beautiful golden curls. Following suit, her features are predominantly youthful, such as her round cheeks, dainty smile, and bright dark-blue large eyes. As the next Goldilocks, Blondie is easily befitting her description. Her signature color scheme leans on pale blues and yellows, and she dresses in childish Victorian-Esque fashions such as Alice bands, ribbons and innocent bear prints. She usually keeps her hair pulled back in a blue Alice-band headband with a bear design in the middle of its bow.

Blondie is the renowned host for Just Right; she spends most of her time broadcasting the latest news around Ever After. Given that she's social, she uses Just Right as a second voice to advocate what other people want to say but cannot directly. As Just Right is also used for gossip, Blondie considers researching other people a good way to get to know everyone better, although she is considered pushy.

On the Ever After High website under Blondie's biography or profile, for "Parent's Story", Blondie says that her story is The Three Little Bears. This is probably the first and only time that an Ever After High story is not titled by its original English name, though Snow White and the Seven Dwarfs instead of Snow White is questionable.

She is the daughter of Goldilocks from The Three Little Bears. Blondie often claims that her mother is a queen in a faraway land, but this is not true. At most, Blondie is a mayor's daughter. Her story is also known as Goldilocks and the Three Bears and a younger sister named Porridge.

Apple White and Briar Beauty consider her as a friend. Holly O'Hair also lists her as a best friend in her profile, due to the fact that she helps Holly unlock doors. She also spends a great deal of time with Dexter Charming and Humphrey Dumpty, as they are the technical crew of her MirrorCast show.

In The Storybook of Legends, Blondie gets a baby bear whom she calls Grizz.

Blondie currently has no one, but is eager to meet her very own "Prince Charming", as she claims "I'm waiting for the Prince Charming who's just right for me."

Blondie has incredible lock-picking skills & can unlock almost any kind of lock, code or safe. 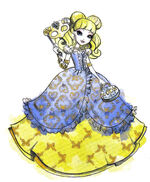