Ever After High Wiki
Register
Don't have an account?
Sign In
Advertisement
in: Pages with reference errors, Characters, Females,
and 3 more
English

Briar Beauty is a 2013-introduced and all-around character. She is part of The Sleeping Beauty as the next Sleeping Beauty and she is a student at Ever After High. In the destiny conflict, she is on the Royal side because she respects her destiny, although; her fear of sleeping for a hundred years (yet she remains a Royal). Like most Royals, Briar also has few doubts with her story. She is afraid to fall asleep for hundreds of years, since it will have a negative impact on her aswell. As she is going to miss all the fun and parties, and also her friends. Briar is serious about this, as she can't imagine herself sleeping while others are celebrating in joy and harmony. Faybelle Thorn, the daughter of the Dark Fairy, is destined to put Briar into a long-century sleep yet; she considers her as her “best frenemy forever after” and enjoys her company.

In English, Briar Beauty is voiced by Kate Higgins.

Briar is a kind and loving girl, and a hyperactive girl who loves adventure, despite the fact that she can fall asleep everywhere and anywhere at any given time, which is strongly due to a curse that her mother Sleeping Beauty had, which Briar inherited genetically.[1] Briar is kind, sensitive about her destiny, and a loving friend. She is fierce and loyal, and also is best friends with Apple White and Blondie Lockes, according to her website profile and the doll profile on the back of the doll box, although her roommate Ashlynn Ella is a close friend of hers.

She is friends with Raven Queen and Madeline Hatter,[2] and also Cupid and Cedar Wood, according to the Thronecoming TV special. Briar is scared for her "destiny" and claims she is not just a party girl, in her words: "Is that how you see me!? Just, a party girl?!" and then explains how she doesn't want to lose her friends. She most likely will lose her friends if she sleeps for a hundred years because, in a hundred years, her friends will all be long dead. She is sensitive, generous, and friendly. Briar loves adventures and journeys but wants to have her life without sleeping for a hundred years. She can be sad when the fact that if she signs the Storybook of Legends, she'll sleep for one hundred years is brought up, but in "Way Too Wonderland", this is solved when Raven signs and turns evil, but Apple brings her back, saving her, and Raven uses her newfound powers to put the pages of the book inside everyone and they don't need to sign the storybook to decide what they want, that they can be Royal or Rebel without signing the book. Briar is grateful to Raven for this and wants to live every day of her life awake. She is generally a good person with a good heart and loves Blondie's MirrorCast show. She enjoys gossip and fashion. In "Thronecoming",[3] she threw the Storybook of Legends down the well so she wouldn't have to sleep for a hundred years.[3] Briar, as not wanting to fall asleep for a hundred years, generally feared the Storybook of Legends. She doesn't have to worry about the book anymore, as the pages of the storybook have been destroyed.

Her "Magic Touch" is having super hearing (she can hear things from miles away) however this only happens when she is asleep.

Briar's look is very beautiful and very princess-like. Briar has long dark brown hair with pink streaks and a rose-shaped bun at the left side of her head, though she sometimes has her hair in a full bun, and she wears pink lipstick. She has medium tan skin and has light brown eyes. Briar is a tall girl, even though she wears super-high heels. Her dress has a rose-like hem down to her knees. Briar likes to wear pink and rose-flower themes in her outfits. In addition, she always wears a pair of literally-rose-tinted glasses, which are sunglasses she calls "crown-glasses", resembling a crown on top of her head.

Briar prefers not to pursue a relationship right now given that, since she is to sleep for 100 years, the prince to awaken her would be far off in the future. Hopper Croakington II has a crush on her, but she ignores his attempts to ask her out as he often gets her gifts such as swamp grass and flies. However, in Bunny Blanc's story, it is revealed that she is upset when another girl goes to a party with him because she did not want to ask him.

Briar is the daughter of Sleeping Beauty and her husband, the Prince who saved her now King. Her mother is prone to the same sleeping spells she is while her father is always on the lookout for heroic adventures and monsters to slay. She also has eight little brothers, a few being name Loyalty, Tenacity, Courage, Gallantry, and Honor. Three of her brothers are triplets and Honor is the youngest of the family. They tend to cause havoc around the castle while making believe their own adventures. They greatly miss their elder sister when she is away at school. Her cousin is Rosabella Beauty, while her aunt and uncle are Beauty and the Beast from the same fairytale. Since both cousins appear afro-latina, it is assumed that Ever After High’s rendition of Sleeping Beauty and Beauty and the Beast are both of latina descent. The race of Briar’s father is unknown, although many believe him to be caucasian, making Briar mixed-race. The race of Rosabella’s father is also unknown. The two families have a hard time interacting as Briar's heroic father cannot accept Rosabella's father was once a beast.

Her best friends are Apple White and Blondie Lockes according to her profile but is also shown to be friends with Raven Queen, Ashlynn Ella, Madeline Hatter and C.A. Cupid. She is fiercely loyal to Apple and will do anything to protect her or save her. Briar saved her life from sleeping in "Thronecoming". Briar is also shown to be friends with her cousin Rosabella, and Rosabella sees her as a best friend according to her (Rosabella's) profile. Her frenemy (friend-enemy) is Faybelle Thorn, "destined" to put her into a hundred-year-long sleep literally, by having her prick her finger on a spinning wheel, which they are more commonly used for thread. Although she is fond of Blondie, she, like most people, does not believe that Blondie has royal heritage and when she was a little girl she had a fairy friend named Rosella.

While Briar is asleep, she could hear everything for miles.

Briar tends to have a habit of falling asleep at any time and anywhere.

She is named "Briar" as a reference to The Grimm Brothers version of Sleeping Beauty "Little Briar Rose", though some translations renamed her "Rosamond". 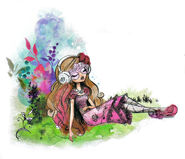 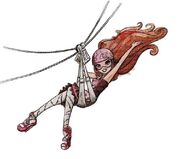