All of us Wonderlandians stick together, but I'm closest to Alistair Wonderland and Lizzie Hearts.

Bunny Blanc is a 2015-introduced and all-around character. She is part of Alice's Adventures in Wonderland as the next White Rabbit, and she is currently a student at Ever After High. She was stuck in Wonderland[1] before her subsequent trip to Ever After, where she is currently staying with Alistair and the rest of the Wonderlandians. In the destiny conflict, she is on the Royal side because of her general belief in following her path in life. She takes great delight in starting the entire Wonderland tale by taking after her father.

In English she is voiced by Karen Strassman.


In Latin American Spanish, she is voiced by Hiromi Hayakawa.

Bunny is shy, however she's also quite intelligent. She is often nervous when it comes to solving problems, so she's dependent on her friends for that. Bunny's rather mature, patient and unassertive towards others and is frequently on-time wherever she goes, regardless if she's lost her way. Because of that, she's described to be never stressed and quite cool-headed.[2] However, unlike all of the White Rabbits before her, she somehow manages to be on time wherever she has to go, whenever. Bunny herself believes this is just sheer luck occurring on countless occasions, considering that her luck also brought her to Ever After.

Bunny has the ability to transform into a bunny. In her human form, Bunny has light pink skin and shoulder-length white hair with a fringe. In her bunny form, she has big green eyes and a pink nose, with white fur. Bunny usually incorporates stopwatches, and clocks in her designs, which also fit her destiny as the future White Rabbit. In her human-like form, she possesses a peach-like skin tone(more white in the artwork), blue-green eyes, and typically wears clothing with faux fur and black gloves like her father.

Despite being one of the newest students at Ever After High, Bunny considers Ever After more fruitful than she'd realized - she enjoys taking part in school clubs and being part of her community. For example, under a short amount of time, Bunny had joined the school band in which she plays horn, Track and Shield, and even the Royal Student Council. She also is part of the Party Planning Committee.

As a side interest, Bunny also plays chess with Alistair in his chess club.

Her father is the White Rabbit, but her mother is unknown.

She is close with all Wonderlandians but is closest to Alistair Wonderland and Lizzie Hearts.

Bunny has a crush on Alistair Wonderland. She gets jealous when he talks with other girls, but she feels he has always seen her as a friend. This changes in the Carnival Date line.

Bunny has the ability to transform into a rabbit at will. 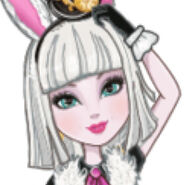