Cedar Wood is a 2013-introduced and all-around character. She is part of The Adventures of Pinocchio as the next Pinocchio, and is a student at Ever After High. In the destiny conflict, she is on the Rebel side out of a general belief that people should be free to choose, though she herself is eager to follow in her father's footsteps and become a regular girl.

In English, Cedar Wood is voiced by Jonquil Goode.

In Latin American Spanish, she is voiced by Ana Paula Corpus.

A true friend to a rebel named Raven Queen, through and through, Cedar's inability to lie and consequential, but unintentional, blunt speech patterns has earned her no enemies thanks to her big heart and gentle nature. She's a quirky, talkative girl with a true talent for expressing herself. Her high emotional drive makes her easily excitable, however, and a small worry can easily work her into a frenzy.

As the next Pinocchio, one might expect Cedar to be an experienced liar, but the opposite is true. At a young age, her father had a truth spell cast on her, which prevents her from lying and makes her prone to share truths without actual provocation. The spell won't wear off until her incarnation of the story commences.

Cedar has dark brown, wavy hair with purple strands in her braid, wooden dark brown skin and dark brown eyes. As for her outfits, Cedar usually wears something artistic, bold, and appealing. As such, she uses the colors yellow, purple and various shades of pink for effect.

One of Cedar's favorite pastimes is painting. Not only does she use this as an extension of her voice, she uses it to express her inner feelings and what she cannot say verbally. An extra interest for Cedar is photography, as she was one of the people who helped Apple and Raven piece together their yearbook by helping them take photos of school events.

Main article: The Adventures of Pinocchio

Cedar is the daughter of Pinocchio. Her other relatives include grandfather Gepetto and Uncle Elmer.

Madeline Hatter counts Cedar as a best friend, and she is also good friends with Raven Queen. Her roommate is Cerise Hood, as revealed in The Storybook of Legends and her bio profile, and they both consider each other best friends.

In A Wonderlandiful World, Daring Charming was interested in Cedar because she was flesh and bone, and apparently very pretty to Daring. She did not reciprocate his feelings.

Her father, Pinocchio, was originally a wooden puppet, and she is named "Cedar" because cedar is a type of wood. The name Pinocchio comes from the word pino- which translates to pine. 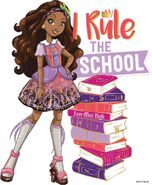 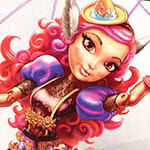 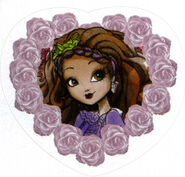