Cerise Hood is a 2013-introduced and all-around character. She is part of Little Red Riding Hood as the next Red Riding Hood, and she is a student at Ever After High. In the destiny conflict, she is on the Rebel side as she has no choice. Everyone knows that Cerise is the daughter of Little Red, but very few know she is also the daughter of the Big bad Wolf. She is a person who by the rules of destiny should not have been born. Destiny punished her with half-wolf ears which she has to cover at all times. She seeks to change that for both her own sake and her parents'. Of course, she can not let anyone know until the world is no longer hostile towards her existence. This frustrates Cerise greatly on a daily basis, as does the fact she is forced to wear her hood constantly to conceal her half-wolf ears.

In English, she is voiced by Rena S. Mandel. In "Spring Unsprung", Cerise's voice is credited as Rena Strober.

In Latin American Spanish, she is voiced by Analíz Sánchez.

Cerise seems to be on good terms with most students, but she is nonetheless a reserved individual who is more than meets the eye. Granted that she is not exactly a loud individual, her inhuman athleticism surprises most. Being part wolf, Cerise is an excellent athlete, if not the best at Ever After High. She's prone to wolf-like tendencies and outbreaks, which is a huge inconvenience as she's trying to hide her heritage. Nevertheless, she loves her parents equally as she was ecstatic when they had a picnic together and regularly carries around a locket of their family photo. She is cautious about her secret and makes sure she keeps her wolf heritage out of public knowledge.

Though Cerise acts somewhat ‘stand-off-ish’ to the people who want to know more about her. She is incredibly protective of her friends and respects them for their secrets and is definitely not the type to betray anyone for something of her own benefit. She is a bit mysterious. She goes under the name "Cerise Hood", with the family name "Hood" from her mother to protect the fact that she is also Badwolf's daughter. She keeps this fact a secret.

Cerise has long, dark brown hair with several white streaks (predominantly on the left side) and slate gray-blue eyes. She has tan skin like her father. When she has her wolf-like outbursts, her eye color changes to yellow gold. Her makeup and outfits consist of darker colors and red, although she usually uses natural colors for her lipstick. She is never without her mother's famous red hood, which hides her half-wolf ears. She also wears grey leggings and brown hiker boots.

Although Cerise tries her best to hide her family heritage, she is not discouraged from exhibiting her athletic ability or becoming outgoing whenever she needs to be. As the daughter of the Big Bad Wolf, she has sharpened senses such as superhuman speed which she utilizes when playing sports - her favorite sporting activity being Track and Shield. Outside of school, Cerise and her family try to spend as much time together as possible. On rare occasions, do they all get the chance to have family picnics.

Cerise has also shown that she has some interests in getting involved with the school and her friends more, such as planning school dances.

Cerise is both the daughter of Little Red Riding Hood and the Big Bad Wolf, and therefore is a child who should not be born. Though Cerise had a warm and loving childhood in their care. Now that she is preparing to take over from her mother, her heritage is catching up with her. Although once, Cerise had an illusion on what her life might have been like if she followed her father's footsteps.[1] She is distantly related to Sparrow Hood. It was revealed in Justine Dancer's diary that Ramona Badwolf is her older sister.

Cerise often bickers with Ramona about their family secret, but they do love each other and ended up having a race at school.

As a baby, Cerise exhibited puppy-like behavior, such as chewing on furniture and chasing chickens.

Cerise considers Raven Queen a best friend. Raven and Maddie are the only people she has shared the truth about her family with, showing how much she trusts them. Cerise also considers her roommate, Cedar Wood, and Madeline Hatter her best friends.

Rosabella Beauty looks up to Cerise, describing her as compassionate and caring. Ginger Breadhouse also considers Cerise a best friend as they have known each other since childhood.

In "Thronecoming", Cerise tells the guys she's considering trying out for the bookball team, but Daring Charming initially tells her not to because he believes she was a "damsel-in-distress." Later, he asks Cerise to join the Thronecoming game when it becomes apparent that they need her. At the Thronecoming dance that night, Daring apologizes to Cerise for what he said, thanking Cerise for saving the game, and they share a dance.

Cerise owns a pet direwolf named Carmine, who she had a race with in "The Cat Who Cried Wolf".

Cerise notes that she is shy around boys, but she's "always been drawn to the leader of the pack." She dances with Daring at the Thronecoming dance.

Due to being half wolf, Cerise has enhanced senses, speed and strength. Her eyes glow yellow when she is using her wolf powers.

The name "Cerise" is another shade of red. "Cerise" means "cherry" in French. 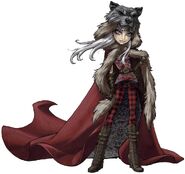 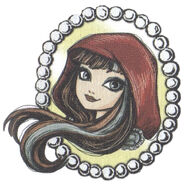 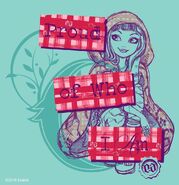