While not the purpose of the franchise, costumes make up a distinct and plentiful category of Ever After High merchandise. Mattel does not produce any costumes, but licenses the rights for costume production to other companies. Two companies, Party City, and Justice, produce costumes exclusive to their stores.

The first five regularly available costumes were released in September of 2014. These five represent the four main characters — Raven Queen, Madeline Hatter, Briar Beauty, and Apple White — as well as Cerise Hood in their 'Signature' fashions. Later in 2015, Kitty Cheshire, Ashlynn Ella, Blondie Lockes, Farrah Goodfairy, and Lizzie Hearts were released. All costumes were sold without wigs and shoes, which had to be purchased separately.

Along with the regular costume lineup, an Apple White Royally Ever After costume is featured in the next wave, along with a Heartstruck C.A. Cupid. 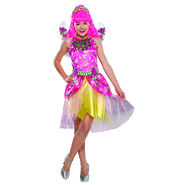 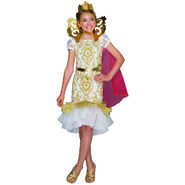 Royally Ever After Apple White
Community content is available under CC-BY-SA unless otherwise noted.
Advertisement