Courtly Jester is a 2015-introduced and fiction-only character. She is the daughter of the Joker Card and is closely affiliated with Wonderland High, the main high school in Wonderland, as the student body president, which by Wonderland rules, also makes her said school’s vice principal and principal. She was held in Wonderland Prison, doing her time to make up for the chaos that she’s evoked upon Wonderland.[1] Later, she was released and sent to Ever After High as a student with a legitimate destiny. In the destiny conflict, she is on the Rebel side because she wants to be a queen. In fact, she is enrolled in Princessology because of this.

Courtly is the type to have an aggressive and assertive, power-hungry exterior and an insecure interior, often referring to herself as “lowly Courtly Jester”. Her Joker heritage also makes her mischievous and a liar. She has no trouble twisting others’ words. In “Way Too Wonderland”, she is the head of a conspiracy against the Queen of Hearts, planning to overthrow her. As principal and vice-principal of Wonderland High and chief of prosecution at the school court, she has huge power over a significant part of Wonderland, as even the royal herald goes by her rules.

However, a lot has changed since then. In her time at Wonderland Prison, Courtly claims to have rewritten her ways and promises to be good and make more friends.

Courtly has short, blond, pastel purple and blue-streaked hair styled in a one-sided fringe, covering her left, right-hand-side-sided eye. A portion of it is braided down the left side of her head. She has scarlet pink eyes (purple on the doll) and a white diamond painted around her right-hand-sided eye, as well as a wide red grin, befitting her Joker nature. Courtly has pale skin and sports an eccentric jester-like look.

In the box art, her bangs are dyed purple and she wears her hair in a low bun. On her doll, her bangs are streaked and curled away from her eyes, and she wears a long ponytail. These changes to her appearance could be that her Wonderland attire is different from her Ever After attire. More likely, it is just a simplified variation of her outfit and hairstyle.

Courtly enjoys playing croquet in the fields with her friends and she is said to be a natural at it. She is also a skilled trapeze artist, as she is seen hanging upside down on one.

She is the daughter of the Joker Card.

Duchess Swan is considered Courtly's best friend. She is also well acquainted with Raven Queen and Lizzie Hearts, although she nearly killed Raven and tried to overthrow Lizzie’s mother. She was also arrested for stealing Lizzie’s identity. She and Kitty Cheshire share an interest in pranking, and they like to team up to prank others.

She has her eye on Alistair Wonderland, despite him being Bunny’s boyfriend. 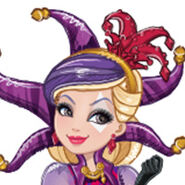 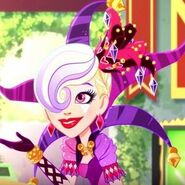 Retrieved from "https://everafterhigh.fandom.com/wiki/Courtly_Jester?oldid=103901"
Community content is available under CC-BY-SA unless otherwise noted.