Ever After High Wiki
Register
Don't have an account?
Sign In
Advertisement
in: Characters, Males, Royals, Students

Prince Charming from Snow White and the Seven Dwarfs (formerly), The Beast

Daring Charming is a 2013-introduced and all-around character. Despite a life of being groomed for a destiny as the Prince Charming from "Snow White and the Seven Dwarfs", he is eventually revealed to be the future Beast of "Beauty and the Beast". He is a student at Ever After High. Daring is the older brother of Dexter Charming, another Royal, and Darling Charming, a Rebel.

In English, Daring Charming is voiced by Evan Smith.

For the most part, Daring is his father's son - he is, obviously, quite charming and handsome. He is also quite egotistical and conceited and very infatuated with his appearance, as he is often seen with a mirror or flashing his smile to girls. It is apparent that Daring's sanity, confidence, and happiness all revolve around him seeing himself in the mirror. He does have some sense of duty though. He is often seen escorting his (previous) future queen Apple White and he is well-practiced in gallantry. Daring also takes extra precaution when his teeth get whitened by covering his mouth to not risk blinding passing students.

Aside from his confident airs, Daring has shown to be a sensitive guy at times, prone to emotional outbursts in times of great stress. His profile information says that he's easily upset, though seeing something beautiful can calm him down (such as his own reflection). He cares greatly for his friends and family, especially his younger siblings who he tries to look out for (though not always in the best way). Nonetheless, he is not afraid to admit to his mistakes and apologize to others.

Daring has short and wavy light blond hair, pale skin and pale blue eyes. He also wears letter jackets with EAH printed on them (which is the Ever After High school-logo), white, high-top sneakers with gold designs and crown on them, blue jeans, and blue, checkered-patterned vests underneath his letter jackets. In "Epic Winter", he wears his 'Signature - Royals' letter jacket with a fur-lined collar, but it is under the doll line, "Epic Winter", not "Signature" or "Signature - Royals". He wears this in "Epic Winter", the TV special. His clothing mostly consists of letterman (sports) jackets or in other words "letter jackets" and gold crowns for his head. He dresses formally and casually with a mixture of letter jackets to bring out that unique look.

Daring's primary interest is his own appearance, he is often seen admiring himself in his hand mirror. He is also one of Ever After High's most athletic students, Daring goes all-out when it comes to bookball. He plays for the Ever After High's bookball team and seems to be quite skilled at the sport.

Although he is rarely shown in that sense, it can be assumed that Daring is skilled in swordsmanship and has achieved many heroic feats. This is suggested numerous times, with one example being in "Spring Unsprung" when Cupid and a few other students track him down and ask him to slay a dragon that's running rampant. And as suggested in "Save Me Darling!", Daring also plays the hero role in Damsel-in-Distressing, in which he "saves" the girls in scenarios that would otherwise render them helpless. In addition to this, he is seen sparring with Legend in the True Hearts Day special, with the former using a shield and sword to defend himself against the latter's fire.

Though Daring doesn't have a destiny in particular, he was believed to be the Prince Charming in Snow White's tale of "Snow White and the Seven Dwarfs" but in "Epic Winter" it is found out that he is meant to be the beast in Rosabella's tale of "Beauty and the Beast".

He is the son of King Charming and Queen Charming and has two younger siblings, Dexter and Darling. Daring is naturally close with Dexter, his brother, and has been known to offer him encouragement and advice. However, Dexter has secret feelings that Daring is somewhat overshadowing him. Daring is also close with his sister, Darling. He helped search for her when she disappeared in "Way Too Wonderland", and Darling was the first person to notice Daring was missing when his hand mirror was left alone in "Dragon Games". Darling knows Daring well enough to be forward with him when he is vulnerable, such as when Daring realized he was not Apple's Prince of Destiny, and Darling told him that it is time to turn the page, as some of them are not going to follow their original destinies.

According to the Ever After High books, he has numerous cousins and each set uses the same first letter in their names. The cousins are Bountiful, Beauteous, Breathtaking, and Beloved, Courageous, Cherished, Caring, and Charity, Elegant, Earnest and Errant, Fragile and Fearless. The youngest cousins seem to look up to him and during family get-togethers, he gladly plays games with them, even acting as the "slain beast". Fairest Charming is his youngest aunt, Siegfried is his oldest uncle. His grandparents are Alluring and Auspicious Charming.

Daring is close with Apple White, as they hang out together often. Daring also showed concern for Apple when she was poisoned in "Dragon Games".

Daring initially denied Cerise Hood's request to try out for the bookball team, because he believed she was a "damsel-in-distress," but later asked Cerise to join the Thronecoming game when they needed her. Later at the Thronecoming dance, Daring apologizes to Cerise for what he said, thanks Cerise for saving the game, and they share a dance.

Daring is also friends with most princes. Hopper Croakington II is his roommate and they get along as well, as well as his brother Dexter Charming. He and Dexter get along brotherly.

While Daring has the adoration of many girls in school and has been known to embrace this, he has shown little interest in being in a committed relationship. However, in "Lizzie Heart's Fairytale First Date", Daring asks Lizzie Hearts out as a dare, but Daring ends up actually liking her. In A Wonderlandiful World, Daring goes to lengths to impress Lizzie and understand her riddlish sayings before being transformed by the Jabberwocky's magic. Close to the end, Daring, now transformed into a beast cub, saves her and the other girls escape from the Jabberwocky, which later prompted Lizzie in 'Friends would be Aces' to accept his offer of friendship and knight him as protetor of wonderland- Though, that title would be rendered null as they'd have their memories wiped later on the chapter. In the next chapter, Daring decides to accomodate to Lizzie's request of only being friends with pirates, which Lizzie welcomes since she feels her mother wouldn't dissaprove of their friendship then. In Next Top Villain, Daring asks Lizzie out, but Lizzie rejects him. It is unclear what happened with their relationship, but Kitty Cheshire's diary does reveal that Daring went to the movies with Duchess Swan after asking Lizzie out, which upset Lizzie.

Originally believing he was destined to be the next prince in Snow White, Daring did claim he was content to settle down with Apple White when the time came. She likewise finds him charming. When Apple is poisoned in "Dragon Games", it is revealed that Daring is not her Prince Charming when his kiss fails to wake her from her slumber. According to being in a two-pack in the "Epic Winter" doll line with Rosabella Beauty and turning into a beast in the TV special with the same title, his real destiny is to become Rosabella's Beast. Both Rosabella and Daring have developed strong feelings for each other. In Rosabella and the Three Bears, it says that Daring might be Rosabella's prince. He shows a great interest in her approval of him and seems willing to accept a destiny as the beast, looking to her as he says so which implies he wants their shared story.

Holly O'Hair and Duchess Swan have crushes on him. Farrah Goodfairy calls him charming. 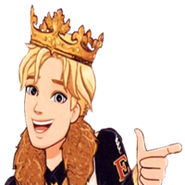