Raven Queen and Rosabella Beauty. They're both strong and stand up for what they believe in.

Darling Charming is a 2013-introduced and all-around character. In the destiny conflict, she is on the Rebel side because she wants to go on adventures instead of being rescued. She is part of a fairytale yet to be solidified, but it has been strongly hinted to be "Snow White and the Seven Dwarfs", with her part being that of the one that awakens the bewitched princess and/or The White Knight of Through the Looking Glass, And What Alice Found there. She's a student at Ever After High. She is part of a long line of Charmings, and is the twin sister of Dexter Charming, as well as younger sister to Daring Charming.

In English, she is voiced by Marieve Herington.

In Latin American Spanish, she is voiced by Nycolle González.

Darling is rather coy, acting shy, overly sweet and obedient, truly charming, true to her family name. Behaving like she is expected to, acting like a damsel in distress, to keep her family satisfied. Darling also has a love of reading and learning the unknown⎯quite mysterious herself, she has been called a bookworm by her brothers and is a good researcher.

However, when she drops her façade, Darling has an incredible sense of whit, adventure and action - she would much rather live the life of a daring hero than as a dainty princess. She hides herself in a suit of armor[1] so that what is highly expected of her won't tarnish.[2] However despite her reputation, Darling is far from a damsel-in-distress. Deep down, Darling has an unwavering will and won't be afraid to step in a situation and offer her help. Darling also has a "Special Touch", that when she tosses her hair, time will slow down.

Darling has light skin and long and wavy platinum blonde hair with blue streaks tied back in a small bump, which she tamed to cascade down her back in curls.[3] Like her brothers, Darling has blue eyes. She also has a beauty mark under her right eye.

Darling delights in reading books; she's been reading ever since she was little. Darling has been described as a bookworm by her brothers, so she more than likely visits the school library from time to time. Because her library excuse is believable enough, she uses it as a chance to go adventuring in her White Knight getup.

Her fairytale involved being a damsel-in-distress, locked in a tower surrounded by a dragon only to be saved by a knight in shining armor or prince which parallels the legend of Saint George And The Dragon. Of course, her story could apply to any type of Fairytale story with dragons, a prince, or a knight. Her future chosen destiny could be as the White Knight which is a part of the story Through the Looking Glass, And What Alice Found there and/or as the next princess charming of Snow White And The Seven Dwarves.

Darling is the only daughter of King Charming and Queen Charming. Daring and Dexter are her older brothers; the former by nine months, the latter by a few seconds, as she and Dexter are twins. She gets along better with Dexter, not just because he is her twin, but because they both have doubts about the destinies laid out for them and only trust each other to share these doubts with.

According to the Ever After High books, Darling has numerous cousins and each set uses the same first letter in their names. The cousins are Bountiful, Breathtaking, and Beloved, Charity, Courageous, Cherished, and Caring, Elegant and Errant, Fragile, Fearless and Fairest, and Good-Enough, Gallant, Glorious, Gutsy, Gracious and Gorgeous. Her grandparents are Alluring and Auspicious Charming.

Darling is commonly seen with other princesses, however she sees Raven and Rosabella as her best friends because they both are resilient and strong-willed people at heart. She is also close with her twin brother Dexter. She also became friends with Chase Redford after Way Too Wonderland, who admired her skill in combat and bowed in request to dance.

Darling has stated on her profile that she likes boys who are "pure of heart". More often than not, the majority of male students at Ever After High completely fawn over at even the sight of Darling and constantly try confessing their love to her, albeit being politely turned down by her in the process, since Darling knows all too well that their confessions are just to grab attention and are fake deep down.

In "Dragon Games", Apple White is poisoned by the Evil Queen and falls into a cursed sleep in hopes that nothing will awaken her this time. After Daring's attempt to kiss her fails, he realizes he is not Apple's Prince Charming. Apple starts choking in her sleep, which is a sign that the apple was lodged in her throat. As a result, Darling Charming performs CPR to get the dislodged apple out of her throat which awakens Apple and causes shining lights to come from around them. Because CPR was used to save Apple and not a true love's kiss, there is no clear confirmation as to whether or not this was an act of heroism or true love. There is a post on Twitter by one of the writers that seems to confirm this however since there was an older Facebook post saying they weren't true loves, it is still unclear, however there is a theory that it was originally CPR, but that may have been changed by the writers some point in time.

Darling has a horse named Sir Gallopad. He has the ability to camouflage at will. He is considered a stable and slow steed but actually he loves to gallop. She also has a dog named Chance.

In "Dragon Games", she is chosen by an ice breathing dragon whom she calls Herowing. 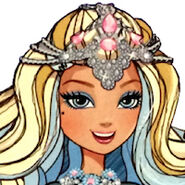 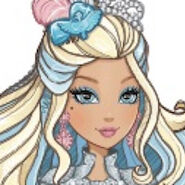