Ever After High Wiki
Register
Don't have an account?
Sign In
Advertisement
in: Characters, Males, Royals, Students
English

My brother Daring Charming and my roommate Hunter Huntsman.

Dexter Charming, fully named Dexterous Charming, is a 2013-introduced and all-around character. He is part of a fairytale yet to be revealed, since many stories are in need of a Prince Charming and he is a student at Ever After High. In the destiny conflict, he is on the Royal side because of family loyalty and expectations. Dexter is the younger brother of Daring Charming, another Royal, and older twin brother of his sister Darling Charming, a Rebel.

In English, Dexter Charming is voiced by Evan Smith.

Dexter is shy and tentative. He is friendly, but unlike his brother, he is not very suave or charismatic. This becomes even more pronounced when he talks to Raven Queen, whom he has a crush on, one on one. At times, he has a tendency to compare himself with his older brother, Daring. Ironically, Dexter is jealous of his brother's ability to impress any girl, unaware that he himself possesses an enchanted gaze that makes girls swoon. The effect is broken when his gaze is not immediate, like when he wears his glasses. Just like C.A. Cupid, his trademark Mattel name is also not his full name or real name.

Dexter has light skin, brown hair with a cowlick and deep blue eyes. He wears a small, headband-like, gold crown and glasses. He is the only Charming ever that wear glasses. Dexter is slightly taller than Raven Queen, known to have a notable height difference to Apple White, while Dexter is similar to height with Briar Beauty, whose height naturally cannot be determined because the latter always wears very tall, heeled shoes, but is naturally tall. He likes to blend styles as a mixture of formal, to reflect his royal heritage as a prince, and casual, as to reflect he mostly doesn't care how he looks (Unless, of course, he has a special date with Raven). His height is somewhat hard to tell what it is naturally because his basic footwear as his 'Signature - Royals' outfit is a pair of high-topped sneakers that actually kind of look almost "boot-like". According to his artwork, he wears one shoe tied (his right shoe) and the other, left, untied. He prefers to wear princely royal jackets that show sign of royalty in royal blue, and wear scarfs/scarves. He also likes to wear shades of gold, a color of royalty. Typically, Dexter prefers to blend formal and casual together to make a whole new "outsider look". He also wears denim pants or jeans in shades of deep gray.

Having a knack for technology, Dexter is often asked to help his fellow students when their MirrorPad or other gadget stops working. That being said, he works with Humphrey Dumpty as one of Blondie Lockes's camera crew for her MirrorCast show, Just Right. Dexter mostly enjoys gaming on his computer, which he spends most of his time doing. He also takes a fancy to building robots and is part of the tech club. Despite being a technology-driven individual, he also likes reading traditional books.

Though, unknown where his roots come from, in his doll profile claims that his father is from: "Every story where a Prince Charming comes to the rescue". Though "Prince Charming" is commonly a "stock character" name in fairytales, this is determined in the franchise by saying that there are MANY unrelated "Charmings" in the Fairytale World, to which seems to cure fans of confusion.

He is the son of King Charming and Queen Charming and brother of Daring and Darling. According to "The Storybook of Legends", he is nine months younger than Daring, while "The Unfairest of Them All", notes that he is the older twin brother of Darling. While he and Daring can have a good time in each other's company, their relation is burdened by their father favoring Daring. Dexter gets along better with Darling, not just because she is his twin, but because they both have doubts about the destinies laid out for them and only trust each other to share these doubts with. They also share a love for reading. According to the "Ever After High" books, Dexter has numerous cousins and each set uses the same first letter in their names. The cousins are Bountiful, Breathtaking, and Beloved, Charity, Courageous, Cherished, and Caring, Elegant and Errant, Fragile, Fearless and Fairest, and Good-Enough, Gallant, Glorious, Gutsy, Gracious, and Gorgeous. His grandparents are Alluring and Auspicious Charming. According to Darling Charming's 'Signature - Rebels' diary, his sister Darling states that even though there are many unrelated Charmings in the Fairytale World, their family are THE Charmings, and it was just heard from the Ever After High staff that there is an unusual fairytale story known as "Princess Charming". Dexter has a complicated relationship with his brother Daring, as it is shown in the Ever After High books, that they often compete with each other to show their love, and in both the cartoons and the books, it is shown that Dexter feels insecure to Daring and always compares himself to his older brother.

Dexter often hangs out with the other Royals, in particular his brother and Blondie Lockes. He and Humphrey Dumpty appear to be closely acquainted, as Dexter also worked with him to run the voting site for Thronecoming. He does not have particular interaction with any Rebels except for Hunter Huntsman, who is his roommate and also has fallen in love outside of his story. He is also friends with Raven Queen, who he has a crush on and usually talks to her for supportive advice, and C.A. Cupid, who's always there to help him and vice versa.

Dexter's pet is a jackalope who goes by the name Mr. Cottonhorn.

C.A. Cupid has a crush on Dexter, but he is unaware of that. He sees her as a precious friend. Dexter has a crush on Raven Queen, but has had trouble expressing himself, in part because he isn't supposed to like her that much due to the Royal/Rebel conflict swirling around. He had become aware of his crush on her ever since "True Hearts Day", which she responded positively to. In the webisode "Chosen with Care", Dexter asked Raven out on a date to the movies, which she said yes to. In "Way Too Wonderland", it seemed as if he and Raven have gotten closer since their date at the movies. He seemed to have been worried about Raven when she had disappeared off to Wonderland, hugging her in relief when he saw her again. According to Truth or Hair, Raven and Dexter were spotted having dinner together at the Green Bean Garden in Book End. In Cerise and the Beast, Dexter asks Raven out on a date to the movies, and she says yes. 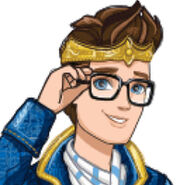