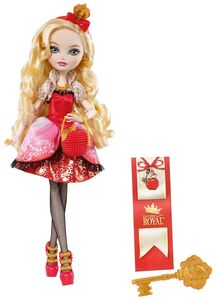 The first Ever After High dolls appeared on shelves in July of 2013 and, due to a marketing scheme that was started in April, were an instant hit. Apple White, Raven Queen, and Briar Beauty led in number of releases, but Apple's mold additionally has been used for an exclusive Blondie Lockes doll.

In total, 2013 saw releases in three different lines, of which three new, for a total of 17 items. There were nine new characters introduced and one exclusive item released.