Faybelle Thorn. Fairytales of a feather flock together.

Duchess Swan is a 2013-introduced and all-around character. She is part of Swan Lake as the next Swan Queen, and a student at Ever After High. In the destiny conflict, Duchess is on the Royal side, even though she doesn’t get a Happily Ever After. Because of her destiny; Duchess is a bitter person who'll go to great lengths to punish people who get Happily Ever After on their destiny and don't commit themselves to it. She also occasionally tries to forcefully switch her destiny with another princess's, but so far she has not yet succeeded in changing her fate with others.

In English, Duchess Swan is voiced by Stephanie Sheh.

In Latin American Spanish, Duchess is voiced by Liliana Barba.

Duchess considers herself an opportunist, though she, like Briar, is a Royal with doubts. Her story has a tragic ending, which makes her bitter and envious of those with happy endings. Though any princess can become the target of her frustration, Apple White is whom she regards as her main opponent. Apple has the best Happily Ever After. Duchess wants to have her Happily Ever After with Daring Charming whom Duchess has a big crush on. She also looks down on Raven Queen, who is perhaps the only princess with a fate as bad as hers, and she is furious about Ashlynn Ella getting the best of both worlds. However in secret, it is mentioned by Brooke Page that Duchess secretly admires Raven and, Apple and tries to find the best in both their personalities.[1]

She is vindictive and spiteful about her ending and willing to risk any chance at companionship with her fellow students to get a better one. She appears to think that if she can get one of them to give up or lose their Happily Ever After, she can take the ending for herself.

Her "Magic Touch", is that she can dance on water.

Duchess has light olive skin(cartoon)/pale skin(artwork, doll), brown eyes, and long hair streaked with black, white, and lavender. She wears a white ballet dress that fades to lavender at the bottom. In terms of accessories, she has a purple feathered headpiece on one side of her head and sports a black choker with a dark-lavender gem. Her shoes are black ballet slippers with purple laces. She also wears dark eyeshadow and red lipstick. In the webisodes and TV specials, her pantyhose are white. In her artwork, she wears black fish-net stockings instead, and there is a black, hard-material belt around her waist. In the doll line, she wears a black, hard, large choker-piece. The middle of the choker resembles the shape of a swan's body. She also has different layering under her dress, which is made of a thin, translucent material, rather than fishnet. Also, the backing of her dress goes straight on the doll, but is looped into a small bow in the webisodes, such as shown in True Hearts Day Part 3 when she was turned around near the bush when saying "There it is." In the webisodes line, Duchess also has white tights or stockings with purple designs on them, and olive-colored skin. Her earrings are also bright-purple fleur-de-lis (plural) in the cartoon series. Her 'Next Top Villain' Suzanne Selfors book series artwork cover of the book is more inspired by her webisode look, while Lizzie Hearts's artwork on the latter book shows Lizzie Hearts with a gold-charm bracelet on her right wrist on one hand, and gold stick earrings with gold hearts on the bottom. Duchess's cartoon look and book cover look from, "Next Top Villain" have her with less lavender hair, and more white hair with black streaks, rather than Duchess's doll look which has black hair with white streaks and pale-lavender streaks.

Duchess feels at home whenever she's dancing on her lake. She goes there whenever she feels distressed or ecstatic as dancing can either calm her down or lift her spirits. Duchess is also a dance student at the Red Shoes Dance Studio, where she hones her skills as a ballerina. As of Next Top Villain, she is a great horseback rider; however, she stopped riding when she was thrown from the saddle some time ago. With her love of being under the spotlight, Duchess also is interested in performing and show business, as she's auditioned for several talent shows and has gotten gigs around Ever After.

Duchess is the daughter of The Swan Queen from Swan Lake. It is revealed that her mother is permanently stuck in swan form and she lived with her grandmother when young. She and her grandmother are on good terms, and she is very proud of Duchess's grades. They usually send each other letters during school time. [2]

Duchess doesn't have many friends due to her hostility. She considers fellow Royal Faybelle Thorn as her best and closest friend, while Sparrow Hood seems to be more of an accomplice when she's up to some mischief. Lizzie Hearts is her roommate, and although she can be easily annoyed by her antics, she thinks of Lizzie as a good friend. Justine Dancer looks up to Duchess due to Duchess's dancing skills, but Duchess doesn't return Justine's admiration. Outside of that Duchess only mingles with fellow royalty. She is also well acquainted with fellow Royal Blondie Lockes as she always goes to her to spill juicy gossip as in True hearts day.

Duchess has a crush on Daring Charming, but he doesn't return her affections.

Duchess has the ability to turn into a swan at will. She can also dance on water. 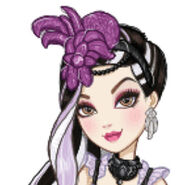 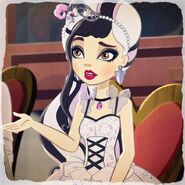