Ever After High (location) 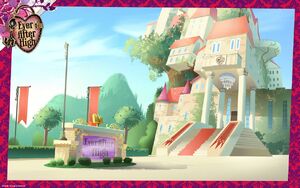 Ever After High is the titular location of the Ever After High franchise, and serves as the main setting of the stories. Its student population consists of the children of many fairy tale entities, whom the school prepares for their destiny to take their parents' roles within the stories, lest all of them cease to exist.

Fairytales have existed for thousands of years, inspiring imaginations around the world. Certain stories were so spellbinding, they were passed down to new generations. But there was nowhere to teach the teenage sons and daughters of famous fairytales to follow in their parents’ fabled footsteps. That is until 1812, when the Grimm brothers opened the doors to Ever After High – a high school where the next generation of fairytales learned to live their legacy. Class schedules specific for each fairytale were handed out – from Princessology for royal legacies to General Villainy for villain legacies. Headmaster Milton Grimm, who currently runs Ever After High, believes the future of fairytales relies on all students fully embracing their prewritten destiny today to become a legend of tomorrow.

Every year, second years at Ever After High pledge to follow the footsteps of their fairytale ancestors by signing the Storybook of Legends. 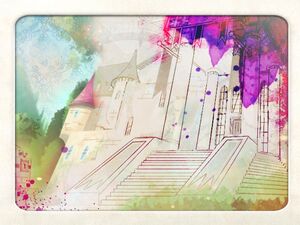 Ever After High is a large castle located at a clifftop. Students are expected to spend the schoolyear at school, so there are plenty of facilities present to accommodate the students even outside classes, and what is lacking can be found in the Village of Book End, which is the village in front of the school. Some of the students even have jobs there. Beneath the school lies the Vault of Lost Tales, which only a few know about, and the school is for a large part surrounded by the Enchanted Forest, which is a pleasant place to be by day but not so much by night.

Because the students live at Ever After High, there are dormitories present, split by gender. The following students are rooming together. Any student missing from this list is doing so only because their roomie is unknown, not because they don't have a room. 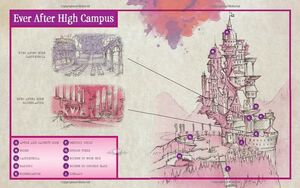 As the continued existence of their world depends on it, many fairytale figures have taken up a job at Ever After High to prepare their children and those of their peers to take over the stories. This is not to say that there are no staff members who support the students' search for an own destiny or ones who try to gain benefit from their important job, but on average the Ever After High staff fits within the spirit enforced by Headmaster Grimm. 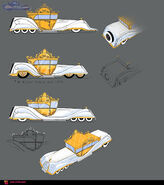