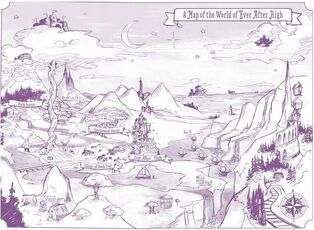 The Fairytale World is the world inhabited by figures from fairytales. It is a collection of numerous realms that each align with one or more fairytales. The entire world's existence depends on the continuation of the stories, which schools like Ever After High prepare each generation to do. Travel between the realms happens by use of portals. It is revealed to be ruled by Snow White and her daughter Apple White, though different Realms have their own leaders.

Ever After High, the world of Ever After, and possibly the entire Fairytale World thrives on holidays. Some of which are just to celebrate particular stories, but many have social and magical significance.