Ever After High Wiki
Register
Don't have an account?
Sign In
Advertisement
in: Characters, Females, Royals,
and 5 more

Briar Beauty is my best frenemy forever after, and Duchess Swan is wicked cool.

Faybelle Thorn is a 2014-introduced and all-around character. She is part of "The Sleeping Beauty" as the next Dark Fairy, and she is a student at Ever After High. In the destiny conflict, she is on the Royal side out of family honor. Even as a child, Faybelle has always loved cheerhexing. However her mother constantly warns her that if cheerhexing happens to overtake her destiny, she will put a stop to it. Faybelle is not prepared for such and loves both her destiny and cheerhexing a fair amount.[1] Her story is known as both Sleeping Beauty and, according to the Ever After High website, The Sleeping Beauty. She is the daughter of the Dark Fairy, and is a dark fairy herself.

In English, Faybelle Thorn is voiced by Haviland Stillwell.

In Latin American Spanish, Faybelle is voiced by Marysol Cantú.

Faybelle Thorn is a competitive girl with a true penchant for wrongdoing. Encouraged from a young age to use her powers for nefarious purposes, she holds no qualms about using her fairy heritage to make sure things always go her way. She considers villainous destinies a mark of prestige, which is why she's distrustful of Raven Queen, whose mother stole the role of the villain in The Sleeping Beauty from Faybelle's, and then has the audacity to reject the most prestigious villain's role of them all. Due to a family curse, people always forget to invite Faybelle to parties, which is a great source of spite for her.[2]

Trouble follows Faybelle, and she's always at the center of attention wherever she goes - for better or for worse. Her ambition is both her greatest strength and her Achilles' heel, as most of her exploits to assert her spiritual dominance over her fellow students usually end up backfiring in embarrassing or tragic ways. Nonetheless, she remains unbroken and is always ready to prove herself once more. Although she definitely comes off as snide and selfish, Faybelle is a product of her lineage, and isn't without humanity. She knows when she's taken things too far, and has been known to apologize for her wrongdoings, however begrudgingly. She is a cheerhexer, the Ever After High equivalent of fearleader to Monster High. In Ever After High, cheerleading is also cheerhexing (like fearleading), but in the Shannon Hale books, it is still called "cheerleading" like in real life and "cheerleader" is used to describe Faybelle's uniform outfit in "The Unfairest of Them All", and even in "An Hexclusive Invitation", "cheerleader" is used by Hopper Croakington II to describe Faybelle's school sport. It is certainly unknown if it is because, the phrase was non-invented at the time, or that the creators didn't think of it because there is no fairytale-related word that rhymes with "cheer".

Faybelle's platinum white-blond hair is styled in a high ponytail and a wavy side fringe streaked with cyan. Her pale gray eyes are framed by an intricate eye makeup design. She has pale gray skin, pointed ears and four small crystalline fairy wings. (Two wings on the doll). Faybelle was told by her mother, 'Never hide in the shadows', which is why Faybelle always wears glittery accessories, and bright clothes, preferably blue.

Faybelle is the captain of the cheerhexing squad and most of what she does is cheerhexing as it's one of her top priorities. She oftentimes likes to use her time at Ever After High to pursue her pre-determined destiny as the fairy tale world's most evil fairy, though her actions often lead to consequences. Faybelle can be very strict and stern about her cheerhexers arriving on time as she is leading towards the cheerhexing regionals trophy, which she hopes will belong in the Ever After High Muse-eum. Fairy's Got Talent

Faybelle also attends the villain club which she leads and commemorates.

Her mother is the Dark Fairy from Sleeping Beauty.

She considers Duchess Swan as her best friend. Faybelle was childhood friends with Ginger Breadhouse, whose mothers were locked in a constant bragging match over whose child was better at being a villain, which caused Faybelle to see Ginger more as competition than a friend.[3] To this day, Faybelle still acts hostile towards Ginger for her wishes against her villainous destiny. Faybelle also considers Briar Beauty a best frenemy and enjoys her company, as she's quite willing to follow her advice.

She is roommates with Bunny Blanc, whom the books list her as acting hostile to for littering their room with carrot stems.

So far Faybelle is not interested in dating according to her profile, she claims a relationship would "clip her wings". But in her bio or profile, she does claim to think that some Ever After High guys are cute. As mentioned in Fairy's Got Talent, C.A. Cupid tries to confront Faybelle into setting her up in a relationship. C.A. Cupid thinks that Faybelle's sickness (wilted wings curse) is because she has no love in her life. 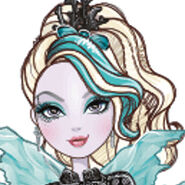