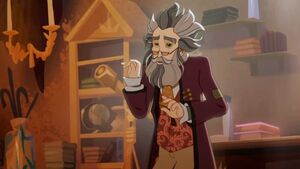 Giles Grimm is a centuries-old being who's traveled many places before he founded Ever After High in 1812. He spends some of his time in the Vault of Lost Tales, a secret library under the school. Giles possesses a mirror that allows him to see whatever he needs, though, so he remains up to date on everything. Since "Thronecoming", he became the co-headmaster of Ever After High after Apple, Raven and their friends broke his spell. He is a 2013-introduced and fiction-only character.

Little is known about his days prior to Ever After High, but back then he and his brother Milton were very close. At one point, they met a genie called Gigi Grant and Giles convinced her finder to wish her a friend to accompany her throughout the ages. The result of this was Whisp, who was like a sister to Gigi. That is until she grew resentful and dangerous. In response, Giles and Milton created a magic mirror to free any finder from Whisp's hold over them.

A long time passed until in the year 1812, Giles and Milton founded Ever After High. He was originally the librarian of Ever After High, until the brothers came to disagreement about how fairy tales should be lived. Milton had promised to himself that he would never act against the stories and was strict in the matter that everyone should outlive their parts like they were supposed to. Giles disagreed and so ended up cursed and imprisoned to the forgotten subterranean library underneath the school by his brother.

Giles appears to be lightly fuzzy from one moment to the other and overall a more loose-minded person than Milton. He speaks in Riddle as a result of the curse placed on him and favors the Rebel argument. Though the big story among fairytale figures is that not signing the Storybook of Legends means the end of all its characters, Giles seems to know that this is, in fact not true, and urges that at least one student rejects their destiny so that everyone will be free.

He is dressed in a maroon coat, a reverse of his brother's blue coat, with some patches. He has green eyes, and dark grey hair with lighter stripes like Milton, but much longer and wilder, he also has a light and darker grey striped beard. He wears an orange vest, an loose ascot, glasses and sneakers, with a pair of long mismatched blue striped and brown-striped socks.

Giles is the brother of the Headmaster, Milton Grimm and he is the son of Mr. Grimm.