Goldilocks and the Three Bears

Goldilocks is a fairy tale character from her story which is of the same name, "Goldilocks and the Three Bears". Her first cartoon appearance is in the webisode Blondie Branches Out on a picture displayed on an easel, while her first book appearance was in The Class of Classics. She is the mother of Blondie Lockes.

Goldilocks is nice and kind like her daughter, and she is shown to be very understanding. She cares deeply about her friends and is always there to help. She also appears to be resourceful.

In the animated web series, she appears to have yellow blonde hair in pigtails that look like swirls, with two black bows in it and a yellow dress with an apron and with a black collar on it. She wears white knee high socks with black shoes.

In the book, she has long, voluminous, curly blonde hair that is pushed back with a pink hairband. She wears a pink dress with a design of a bear around the bottom part. She has many little designs like a light pink ribbon on her neck, dark pink trimming around the sleeves, and light pink ruffles out of the sleeves and skirt.

According to The Class of Classics, when Goldie attended Ever After High, she was the editor for the school newspaper. She, along with Little-Bo Peep and Sleeping Beauty , wrote news stories and articles. Their technology was limited to an old computer. This was before MirrorPads and MirrorPhones were invented.

Main article: The Story of the Three Bears

She is the mother of Blondie Lockes, and it can be assumed that they get along based on how much Blondie seems to respect her mother and also a younger daughter named Porridge

It is assumed she was on friendly terms with Little-Bo Peep and Sleeping Beauty, as they worked on the school newspaper together.

It is unknown if she has a husband but King Charming did have a crush on her in school, and they went to a dance together. 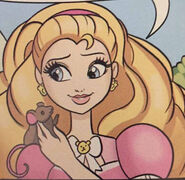 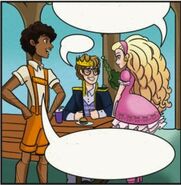 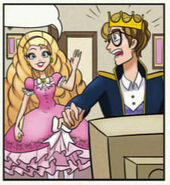