Ever After High Wiki
Register
Don't have an account?
Sign In
Advertisement
in: Characters, Females, Royals,
and 3 more

Of course, my twin sister Poppy O'Hair , and also Blondie Lockes, who helps unlock all those pesky doors.

Holly O'Hair is the twin sister of Poppy O'Hair. She is a 2013-introduced and all-around character. She is the daughter of Rapunzel from the fairy tale "Rapunzel". She is a student at Ever After High. Holly is a Royal, due to a minor mistake in the registry office; Holly thought she was the eldest twin and because she was the eldest she would have Rapunzel's fate and she was very happy with that because she wants her fate as the next Rapunzel. Soon Holly and Poppy learn that Poppy is really the older twin making Poppy the one to receive the Rapunzel fairy tale. However, for years the reverse was thought to be true and Holly enjoys the idea of following her destiny. In "Truth or Hair", it is revealed that Holly is really Poppy and Poppy is really Holly. Their birth certificates were switched by their nanny, Nona. She and Poppy have agreed to keep this reality a secret from everyone else, because Holly wants to be Rapunzel and Poppy doesn't. Holly arranged for Poppy to go to Ever After High despite Poppy's lack of destiny making her a Rebel by default even though later on she becomes the very first Royal.

In English, Holly is voiced by Colleen Foy.


In Latin American Spanish, she is voiced by Jocelyn Robles.

Being a daughter of Rapunzel, she is already used to letting others use her hair for tower escapes, and she seems happy to help. She enjoys reading and often tells her sister Poppy stories. Because of this, she is regarded as smart. This is a pastime she will rely heavily on in her own fairy tale. Holly is a total Royal enthusiast, and she is incredibly preppy.

Holly has very long auburn hair with a braid on the side, which its real color may or may not be strawberry blonde. In addition, she has pale white skin, aqua-blue-green colored eyes (but bluer), and natural pink lips. Holly's choice of attire is quaint yet charming - she enjoys braiding her hair or styling it in an up-do and embellishing her accessories with hollies, hence her name. With her outfits, Holly usually wears pastel colors with gold.

Holly fancies reading in the library, as she knows that she will be doing much of it alone when she becomes the next Rapunzel. But, along with reading, she indulges in writing as well. Be it writing stories or fan fiction about her friends, Holly claims that imagination is a princess's best friend.

Holly is one of Rapunzel's daughters. She has a twin sister named Poppy O'Hair, but Holly will become the next Rapunzel because it was thought she was born first. It is known these days within the O'Hair household that Poppy is actually the older twin, but since no one else knows and the twins are happy with their respective paths, the truth is kept secret. Nona is the twins' nanny and caretaker.

Besides her sister Poppy, Holly often relies on the help of Blondie to ensure that she's not locked behind any doors.

She has a lion cub named Clipper. He is charmed to stay young forever after. 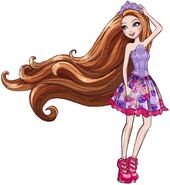 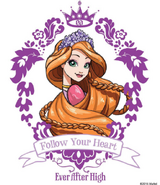