Ever After High Wiki
Register
Don't have an account?
Sign In
Advertisement
in: Characters, Males, Rebels, Students

Humphrey Dumpty is a 2013-introduced and all-around character. He is a student at Ever After High and the son of Humpty Dumpty from the nursery rhyme of the same name. It is currently unknown where he stands in the destiny conflict, however, he appears to show some Rebel support.

In English, Humphrey is voiced by Cindy Robinson.

He has been described as an egghead, figuratively. He is good with technology and is often found in the Mirror Lab. Humphrey is a bit flustered around Apple White, but is equally eager to impress her. He likes to rap in his free time.

In The Storybook of Legends, Humphrey is an animate egg with a white shell body and thin arms and legs. As an egg, he is shorter than most other students. In the cartoon, he is a humanoid male of average height with light skin, blond hair and brown eyes.

Widely considered a computer genius in all fields, Humphrey uses his programming talents from hacking into databases to creating websites. Along with Dexter Charming, he is also one of the camera crew working behind the scenes of Blondie Lockes's MirrorCast show Just Right.

Fascinatingly, Humphrey has an interest in music; he is able to compose rap songs from the top of his head.

Humphrey is often seen with Dexter Charming, who ran the Thronecoming voting page alongside him and helps film Blondie Lockes's MirrorCast show. He also asks Jillian Beanstalk for help in Beanstalk Bravado, where he asks her to teach him how to be brave.

Humphrey has a chicken as pet, whom he's named King Benedict. He gets annoyed when people call King Benedict a rooster, correcting them that his pet is a king chicken.

Like many students at Ever After High, he appears to have a crush on Apple White, even going so far as to break school rules to help her. In Fairy Tail Ending, it is stated that Humphrey clearly has feelings for Meeshell Mermaid after being rescued by her three times. Humphrey asks her on a date to the multi-hex theater. Meeshell says yes, and kisses him on the cheek.

In The Storybook of Legends, Humphrey wears striped pants, a necktie, glasses, and his crown. In the cartoon, he wears a white sweater vest over a robin egg-colored button-up, black suspenders, khakis, and brown boat shoes. He accessorizes with his crown, blue glasses, and a yellow bow tie. 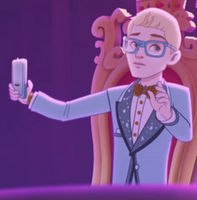 Humphrey wears a baby blue suit. Underneath he wears a layered white shirt with gold buttons and a pin in the center of his collar. 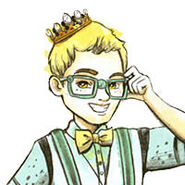