Ever After High Wiki
Register
Don't have an account?
Sign In
Advertisement
in: Characters, Males, Rebels,
and 2 more

Daring and Dexter Charming are my buddies, but I can really be myself around Ashlynn Ella.

Hunter Huntsman is a 2013-introduced and all-around character. He is part of both "Snow White and the Seven Dwarfs" and "Little Red Riding Hood" as the next Huntsman, and he is a student at Ever After High. In the destiny conflict, he is on the Rebel side because he refuses to hurt, kill or even eat animals. As the next Huntsman, he can be relied on to jump into action when he thinks someone needs help, ripping off his shirt in one fell swoop. He learned to love Ashlynn Ella, his girlfriend, in peace, while coming out with their relationship.

In English, Hunter Huntsman is voiced by Grant George.

Hunter is a little boastful, easily annoyed, and distracted. He is serious about his role as a hero, but not as enthusiastic about his job description as a hunter. He cares deeply for nature and animals, and is even a vegan, though his family won't approve this so he keeps it a secret, as he does not eat anything that was an animal or from an animal. He also secretly set free the animals from his father's traps[1]. At times, he can tend to be a little overconfident when confronting problems. Hunter is the kind of boy who goes along with others easily, but has problems finding connection on topics that deeply matter to him, like nature and animal well-being.

Hunter has tan skin, hazel eyes and dark brown hair. The right side of his head is shaven, while the hair on the left side hangs just over his ear. He wears a green shirt and a brown vest similar to a hoodie. He has on brown boots, white pants and carries around a brown satchel.

Hunter is very drawn to the outdoors and its activities that come with it. As the next huntsman, he takes pride in his athleticism. A sport Hunter specializes in is archery, where Hunter has the ability to shoot arrow after arrow and still hit the bullseye on the same target. He usually trains around the school. Outside of the field of his sport interests, Hunter also appreciates being around nature. He and his girlfriend Ashlynn sometimes go to the Enchanted Forest for a romantic picnic out.

Hunter is also part of the cheerhexing squad, being the only male member out of all the other cheerhexers, probably, because, he is in love with Ashlynn and feels he can properly write his own destiny. 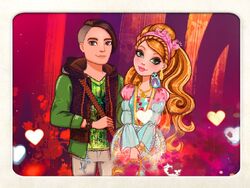 The Huntsman of both Snow White and Little Red Riding Hood is Hunter's father. He also has an axe-capable mother and a baby sister named Fern. According to the original story "Hunter Huntsman's Story", which is available on Nook and Kindle, but also in the fourth-made Shannon Hale book, Once Upon a Time, his sister was given the nickname which Hunter made for her "Fernie". She also bangs on her high chair with a plastic toy axe and often repeats and mimics what other people say. Hunter's mother is also said in "Hunter Huntsman's Story" to be a sturdy-looking and sort of muscular-looking woman, not dissimilar to his father or Hunter himself. Hunter's mother also is very tall in height like the male Huntsman family members.

Hunter likes to hang out with Daring and Dexter Charming, but he only considers himself to have a true connection with Ashlynn Ella.

A squirrel named Pesky is Hunter's pet. As his name suggests, Pesky makes a habit of agitating Hunter, but is also unquestioningly loyal to him. In The Storybook of Legends, Pesky is not mentioned. When the students summon animal companions, a griffin comes to Hunter. Pesky is a fiction-only character, only existing in the doll diaries and cartoon webisodes, along with cartoon TV specials.

Hunter is dating Ashlynn Ella, a princess, despite knowing that this isn't approved of and that they may be endangering their stories. They once dated secretly, but after Duchess Swan found out, they revealed themselves to the school. Ashlynn briefly broke up with Hunter because of the peer pressure she was facing, but on true hearts day she realized that their relationship was important enough to fight for. Additionally, Hunter's allegiance is also motivated by his love for Ashlynn. Ashlynn is a princess who shares a lot in common with Hunter.

Hunter is incredibly creative and crafty, having the ability to create & build anything within seconds. 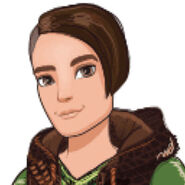