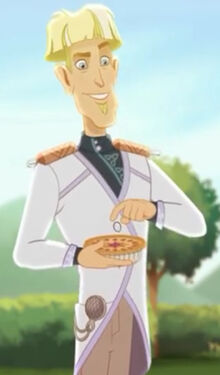 Jack Horner, who prefers to be called not-so-little Jack Horner, is the character ironically from the nursery rhyme Little Jack Horner, likely featuring Jack Horner when he was younger. He is a renowned Ever After food critic and is known for sticking his thumb in a pie, as his own trademark taste test.

In English, he is voiced by Jamieson Price.


In Latin American Spanish, he is voiced by Leonardo García.

Jack Horner's presence can be somewhat intimidating, if not bold.

Jack Horner's bright blond hair is styled in a bowl undercut and he has a small soul patch. He is thin and tall in figure and he wears a white coat complete with shoulder pads, a pocketwatch, a dark teal jumper and light brown pants.

As a food critic, he is invited over to Ever After High as a form of a "push" towards the students who aren't at ease with Ginger. To everyone's surprise, he approves of her food which renders everyone delighted. Ginger in the BreadHOUSE

Retrieved from "https://everafterhigh.fandom.com/wiki/Jack_Horner?oldid=104753"
Community content is available under CC-BY-SA unless otherwise noted.