Darling Charming and Cerise Hood are always up for an adventure.

Jillian Beanstalk is a 2015-introduced and all-around character, and she is a student at Ever After High. She is the daughter of Jack from Jack and the Beanstalk. In the destiny conflict, she is on the Rebel side because of yet unrevealed reasons.

In English, Jillian is voiced by Julie Maddalena Kliewer.

In Latin American Spanish, she is voiced by Montserrat Aguilar.

Although very little is known about Jillian, she seems to be a person who gets straight to the point. She has shown great bravery in Dragon Games. She is also unafraid of heights, as seen in Beanstalk Bravado.

Jillian has peach skin, dark brown eyes, and soft pink (which look red at times) lips. She has lime green streaks with flowers weaved through her light brown hair, which she wears in a braid. Sometimes she wears a flower crown. Her outfit consists of a pink shirt that has a golden lace design on it. A long green vest with a similar lace design on both sides in the middle covers part of her shirt. Mahogany leggings cover her legs. Her belt is golden rope vines.

Being part of the school band, Jillian plays a small golden harp inherited by her father. In addition, she appears to take an interest in music and the environment.

Main article: Jack and the Beanstalk

Her father is Jack from Jack and the Beanstalk, who, in the web series, is called Jack Beanstalk but called Jack on her doll box. Though she loves him, she does not want to be like him as she is on the Rebel side of destiny, though, she does however, have outstanding bravery and the same spirit of adventure as he has.

She considers Darling Charming and Cerise Hood her best friends, as they are always up for an adventure. The students on the band team appear to be well-acquainted with her, specifically Bunny Blanc, Melody Piper, Apple White, Raven Queen and Sparrow Hood. She rooms with Nina Thumbell.

Jillian has a not so small crush on Tiny.

Magic beans: Jillian can sprout a giant beanstalk just by using her beans. 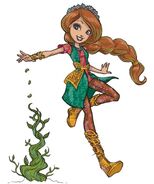