Melody Piper always plays the best tunes, and I royally admire Duchess Swan for her dancing.

Justine Dancer is a 2015-introduced and all-around character. She is the daughter of the 12th Dancing Princess from the fairytale The Twelve Dancing Princesses, and a student at Ever After High. She is in a committee with other Royals, and sides with the Royals in the destiny conflict for unrevealed reasons.

In English, Justine is voiced by Bresha Webb.


In Latin American Spanish, she is voiced by Jessica Ángeles.

Justine is a creative, hardworking, and confident girl who loves to bring out the talent in others for someone who sees the big picture. She has a spirited love for dancing and believes that everyone deserves their time under the spotlight. She also tends to dance in her sleep.

Justine has wavy, dark-brown hair, dark skin, red lips, and vibrant blue (green on her prototype doll) eyes accented with sparkly, gold eyeshadow. She also has blushed red cheeks. She wears a golden-yellow dress, with pink ribbon-patterned designs on it and black hem trimming at the bottom. The long-sleeves and chest part are made of sheer white fabric. Justine accessorizes with a silver, jeweled necklace and a silver metal-plate-like covering around her waist. In the webisodes and TV specials, her tiara sports gold gems on it, and her silver shoes have gold details on them in the cartoon; in her artwork, both her crown and shoes are pure silver.

Justine is an enthusiast when it comes to the performing arts. She is, of course, a skilled dancer in all styles. More often than not, she plans to share her talents by performing in talent shows. Justine is also part of the theater club at school.

Her mother is the 12th Dancing Princess from The Twelve Dancing Princesses, and, like her mom, Justine is the youngest of twelve sisters, who all attended Ever After High. This means that Justine has eleven aunts. It is not known if she has any cousins; her aunts are Twelve Madames, including her mother. Her sisters each specialise in a particular dance style, but she prefers to combine them all into her own style

As she is in a committee, she appears to be friends with the Royals on the team, namely Briar Beauty, Bunny Blanc and Hopper Croakington II. As she is roommates with Ramona Badwolf, she and Ramona get along fairly smoothly. She considers Melody Piper as her best friend. Though not necessarily on the best of "friend" terms, she admires Duchess Swan's dancing talent. She also seems to be friendly with Blondie Lockes and Ashlynn Ella as they volunteer to help her find out what happened to her dance shoes.[1]

There is no information and there are not any pieces of facts in the franchise leading to a love interest or a boyfriend of Justine's.[2] 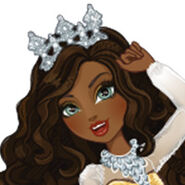