The Queen of Hearts

Kitty Cheshire and Madeline Hatter are the only ones who understand me. Literally.

Lizzie Hearts is a 2013-introduced and all-around character. She is part of "Alice's Adventures in Wonderland", as the next Queen of Hearts and she is a student at Ever After High. In the destiny conflict, she is on the Royal side because of years of family dedication, practice, and belief of destiny in general. Per their escape to Ever After, all the escaped Wonderlandians transferred from Wonderland High to Ever After High.[1]

Like her mother, Lizzie often condemns people and objects to decapitation, but she is really a sweetheart, despite her capriciousness. Regardless of the fact that she is proud of her heritage, Lizzie has aspirations on becoming a kinder Queen of Hearts, however she has trouble expressing that to her friends for it is easier said than done. She goes a bit overboard as she memorizes her mother's daily deck of instructions and using her mother's signature quote a lot, her bold actions often startling others around her. She acknowledges that the people of Ever After take her exclamations far too literally. Because of that, Lizzie values genuine friendship, mostly from her Wonderlandian friends Madeline and Kitty. She is described to act aloof and standoffish to those who don't know her personally in practice of her role as future Queen of Wonderland. Out of the Wonderlandians who experienced the flight from Wonderland, she is probably the most nostalgic one because her mother was also affected. Her Wonderlandian exclamations are often misunderstood by the citizens of Ever After. In the Shannon Hale book called A Wonderlandiful World, its revealed that Lizzie secretly wanted to make friends as she would wish she is one of the girls who likes to party and dance with Briar Beauty but her admiration of following her mother's footsteps made it difficult for her to do so, She is also the strongest believer of 'Nothing is impossible' a Wonderlandian belief.

Her "Magic Touch", is that she has the ability to construct anything out of cards and to chop things with her finger, and she can sense Hedgehogs nearby. She was pretty demanding at first, but when Apple and Briar explained that the students at Ever After High are her friends, not her subjects, she became a little calm.

Lizzie has black and red hair that is partially tied into a heart shaped bump on top of her head. She has pale peach skin and turquoise eyes, and her left eye is covered with a red heart she paints on herself, since she does not have a birthmark like her mother.[2] As the next Queen of Hearts, Lizzie's outfits are frequently seen with very bold yet simple colors, such as red, black, and gold. Lizzie also makes use of her lineage by adding hearts to her everyday wear.

Lizzie Hearts is not one of Ever After High's most easily understood students - she is often likely to hide secret hobbies, such as her ability to play the dulcimer. Lizzie is very much proud of her Wonderland heritage and is rather attached to it; playing croquet is her way of honoring that testimony. In fact, she is the Royal Croquet Team's captain and settles with no less than victory. Obviously, Lizzie is also skilled at playing cards and it is likely her decisive nature comes from the game. She also seems to have an interest in botany. In her free time, she tends to the Wonderland Grove. When Lizzie is not tending her grove or playing croquet, she takes up fashion design as another hobby.

Lizzie Hearts used to date Daring Charming, though her profile bio under her Storybook Romance Status said: "I'll wait until I get back to Wonderland to think about that." According to Kitty Cheshire's Signature - Rebels diary, she loved him dreamily and gushed over him. Lizzie even wanted to be more like Ever Afterlings because she was so attracted to him, not even wanting to answer Kitty Cheshire in Riddlish. Daring was dared to date her but afterwards actually began to fall in love with her in "Lizzie Heart's Fairytale First Date". Lizzie also fell in love with Daring as well. But due to heritage and destiny on the throne, Lizzie asked Daring to keep it a secret, so the rest of Ever After High knows nothing of their relationship. And also, it appeared to be that Daring was caught cheating on her with Duchess Swan. So, knowing this information, they broke up. Ever since then, Daring has gone to the movies with Duchess Swan. In "Thronecoming", he asked Cerise Hood to dance, who is attracted to the leader of the pack. According to "Next Top Villain", Daring tried asking her out, but Lizzie was not interested.

Lizzie is close friends with Madeline Hatter and Kitty Cheshire, claiming that they are literally the only ones who understand her, but also, Alistair Wonderland and Bunny Blanc are close friends with Lizzie. She also appears to get along with Raven Queen after she saved Lizzie’s mother, Daring Charming, Apple White, Briar Beauty and others. In "A Wonderlandiful World", she befriends Cedar Wood. Lizzie is typically close with Wonderlandians.

Lizzie can build an entire structure of cards just by flicking her wrists. 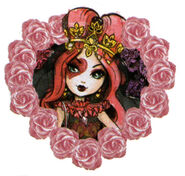