Ever After High Wiki
Register
Don't have an account?
Sign In
Advertisement
in: Characters, Females, Royals,
and 2 more

Apple White and Holly O'Hair have always been two of my biggest fans.

Meeshell Mermaid is a 2015-introduced and all-around character. She is a student of Ever After High and the daughter of the Little Mermaid from the story of the same name. In the destiny conflict, she is on the Royal side, but it was never revealed as to why.

In English, Meeshell is voiced by Rena S. Mandel.

Meeshell tends to be shy or hesitant when trying out new things and meeting new people, though she warms up to them if they share a common interest. For example, she and Melody Piper get along incredibly well due to their mutual love for music.

Meeshell is a literal fish out of water. In her human form, she lacks confidence and is more comfortable in her true mermaid form.

Meeshell has a round face with a broad nose and a full yet dainty smile. Her hair is dark coral-pink in color with dark purple streaks, in contrast with her thick, much darker brows which are specifically dark brown. She wears shimmery pale pink lipstick and blue and pink stars are present on the right side of her face, which may be either painted or birthmarks. In the webisode animation, Meeshell instead has light pink, specifically bubblegum-pink hair, with whitish-pink highlights in it. Also, in the animation, Meeshell has pink brows instead of dark brown. In the artwork, her earrings are just golden-yellow, seashells or just golden-yellow, seashell-patterned earrings. In her artwork, her shoes are pearl-white with a dark-ocean-blue color on the fish-fin-shaped heels. The skirt of her dress has sparkly, frilly edges in her artwork, and she has a seahorse-shaped bracer as a bracelet. The top of her dress is a strapless, tube-like (or tube-top-like) top or above part of her dress that is orange-red with glittery patterns. On her top, she wears a golden-yellow or mustard-yellow chest-piece with short sleeves, seashell and starfishes/sea stars designs on it. The "chest-piece" or chest overlay, metallic-like part also has a red-orange, coral-like bodice on it. In the webisodes, Meeshell wears a red-coral-patterned, chest/bodice part dress with golden, lacy, bronze-ish sleeves and white pearls on her top; the top of the dress has sea-blue coloring and pale-salmon-pink, whitish, scale-looking details. Her dress, which is a mermaid dress, also has a layering-in-and-out, partly-leg-opened bottom to it; and Meeshell's outfit also consists of seashells and Poseidon-based, merfolk-based patterns and swirls on the top or the bodice. The skirt of her dress has ruffles, and her skirt has a slit in it, opening for her legs. Her dress's opening on the legs is both in and out; and her shoes are mermaid-styled/merfolk-styled, bubble-designed heels or mermaid-styled/merfolk-styled, bubble-designed heeled shoes, specifically; and her shoes also have gold accents or rather, gold straps; and her heels/her shoes have fish tail/mermaid tail heels, and the heels on the higher side have red, fish-scaled tops to them, and red-coral-designed strappy parts on top. Her heeled shoes also have pearls in-between them.

In the webisodes, Meeshell's other part of her signature, basic-like look includes bubble-gum-pink hair in long, tight curls, reaching her waist. She also has bubblegum-pink lips (bubble-gum pink), and her skin is much lighter in the cartoon series. Also, in the cartoon, her hair has red corals in it; a band-like, wrapping accessory of pearls in her hair; a seashell in her hair; and her hair also has a green starfish/green sea star and a blue starfish/blue sea-star in it. She has a pink star and some shiny, blue parts of water-imagery on her face, a thinner face; pearled earrings with red corals on top; an arm bracer on her right arm that keeps constantly changing appearance in the animation; and also in the animation, Meeshell has dark-pink, also bubble gum- pink eyebrows. Her hair is bubble gum pink with white streaks and pale purple streaks. Meeshell has light-blue eyes in the cartoon/cartoons, and her pale-purple streaks look almost pink because they are so pale. Her bracer is a sort of "bracelet" to be said; in other words, that has an opening, and the bracelet or bracer is gold and has a star in the middle that almost resembles a seastar. In the animated cartoon/cartoon animation, her medium-tan-to-pale skinned legs turn into a light blue fishtail or fish tail. She also has darkish-pink eyeshadow that matches the color of her eyebrows.

In the artwork, Meeshell has paler-colored face stars or face marks, pale-peach-colored lipstick in a small smile to her lips, tanner skin, and she has a more accurate look to her doll in her official artwork. In the artwork, she has a pink, orange-reddish, sparkly, glitter-looking top of her dress, and the skirt is more of a mermaid dress theme with simplified shoes, and her crown is pearl-white, made of real pearls, and her crown also has a golden-colored part in the middle of it.

Having a love for music defines Meeshell. Though she doesn't really plan on making her interests public, she sings as a hobby and is good at what she does. Her secret heart's desire is for her voice to be heard across the stage and screen of all of Ever After.

While living in the ocean, Meeshell liked riding manta rays. She was very good at it, having won first place in her age group in the manta ray race. Looking for shells and sunken treasures was also a favorite pastime of hers. Meeshell has also mastered the sea languages of Porpoise and Dolphin.

In the book Fairy Tail Ending it is revealed that Meeshell is first introduced to Apple White, who befriends her as apart of her Welcome Committee duties. Apple helps Meeshell get acquainted with Ever After High by helping her to her classes, helping her buy clothes, and helping her find an after school club or team to fit in. She also appears to be closely acquainted with Melody Piper. and Holly O'Hair who also considered Meeshell's best friends. Cedar Wood is one of her best friends to swim with. Meeshell is roommates with Farrah Goodfairy, In "Fairy Tail Ending" , Meeshell and Apple are singing together and in "Fairy's Got Talent", it is confirmed Meeshell and Farrah have become new friends, while they are also roommates. In her old bio, she's said that Melody Piper and Cedar Wood are her best friends or BFFAs. In her first character profile, she states: "I love composing music with Melody Piper and swimming with Cedar Wood." Meeshell also has other mer-friends that she left behind in the Sea Kingdom.

Meeshell has a miniature pet narwhal named Finbert. He floats in a bubble on land.

Meeshell is destined to meet a human prince. Upon arriving at Ever After High, she takes note of which boys are wearing crowns. She soon comes into contact with a prince, but they only talk over the MirrorNet and have never met face-to-face. It turns out the prince is Humphrey Dumpty. In Fairy Tail Ending, it is stated that he clearly has feelings for Meeshell after being rescued by her three times. Humphrey asks her on a date to the multi-hex theater. Meeshell says yes, and kisses him on the cheek.

Splash, a merboy from her ocean school, once held her hand and even kissed her cheek in the moonlight. Meeshell, however, thinks of him as nothing more than a friend. She has never had a real boyfriend.

Meeshell can turn into a mermaid once exposed to water, she can control water as well. 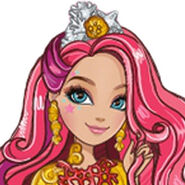