Briar Beauty and C.A. Cupid. I’m not about to define my friends by “Royal” and “Rebel” labels. Ginger Breadhouse really knows how to put together a tasty mix. Also Justine Dancer shares my love of muse-ic.

Melody Piper is a 2013-introduced and all-around character. She is the daughter of the Pied Piper from The Pied Piper of Hamelin. In the destiny conflict, she is on the Rebel side because she wants music to bring people together instead of luring one another away which happens in her story. Her father encourages Melody to follow her heart and pursue her love of music such as being an inspirational DJ, which to Melody, is just a stepping stone in the process of what she truly wants music to become.


In Latin American Spanish, she is voiced by Gabriela Ornelas.

Melody is a DJ with considerable talent, if the fact that she's Briar Beauty's favorite is anything to go by. She doesn't seem to care about Headmaster Grimm, and his rules much as she interrupts him to start the party and skip the speech in "Thronecoming". She always wants everybody to have a good time. She doesn't speak much but lets her music do it for her, like controlling her dragon or consoling Daring.

Melody has long lavender-white hair streaked dark purple, violet-brown eyes and olive skin. Melody's style is noticed as classy yet edgy, spunky, and a hint of rebel rocker. She enjoys splashing some black accents in her clothing and ornate patterns with musical notes.

Being Ever After's most inspiring DJ, Melody's interests are comprised of creating mixes or changing them. In her spare time, she usually hangs around her dorm and listens or downloads music. According to Melody's diary, she and her father are both Rebels "at heart", but despite both of them being "both Rebels at heart", Melody has advanced to write her own destiny, while her father got trapped using a flute to summon mice and rats. She is a muse-ic enthusiast as she actually has every music track that she plays depending on her emotions like in Dragon games when Daring asks her to play something consoling after Apple got poisoned. She also formed the band Happy Glees as mentioned in A Fairy Tail Ending.

Melody is the daughter of the Pied Piper, who teaches Muse-ic Class at Ever After High. While her father has the habit of summoning rats whenever he blows on his trumpet, each time Melody deejays, three blind mice tend to dance along.

It appears that she is a friend of Briar Beauty and C.A. Cupid. She is also roommates with Ginger Breadhouse who she comes to for advice at times. Melody bonds with Justine Dancer over their shared love of music. Melody is also close with Meeshell Mermaid, who she likes because Meeshell is musical.

On the Ever After High website she initially stated that the the man for her must have music in their hearts and no rats. Her updated profile states that the person for her has to have spelltastic taste in music.

Melody has the ability to hypnotize & control the movements of humans & creatures with music.

The name "Melody" is perfect for the daughter of the Pied Piper, because it is a musical name. According to Class of Classics, Kitty's mom, the Cheshire Cat, is responsible for naming Melody. Piper's dad owed her a favor, and the Cheshire Cat decided that she wanted to name his firstborn child. She was originally going to pick a more wild name, like "frumious." However, she was apparently just teasing, and settled on "Melody," since she likes names that end with "Y." 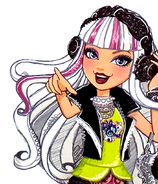