Milton Grimm is a centuries-old being who's traveled many places before he founded Ever After High in 1812. These days he serves as the school's headmaster. He treats the students with a favorable destiny better than the ones without, but nonetheless insists that everyone follows the destiny as dictated by their story, even going as far as letting a case like the Evil Queen's theft and replacement of the real Storybook of Legends go unscathed for the sake of students following their destiny.

In Latin American Spanish, he is voiced by Ulises Maynardo Zavala. Milton's child version is voiced by Iván Bastidas.

As headmaster, Milton is a strict man who insists that no one so much as considers ignoring their destiny. More than any other, he seems to fear that rebellion will lead to the loss of stories and eventually the fairytale figures' entire world. While understandable if true, Headmaster Grimm has no qualms about pointedly ignoring that some students have destinies that are anything but appealing. But the main reason why he's like that, is due to an incident in his childhood that cost the life of Giles. Ever since then he vowed to make sure that no one ever go outside their stories.

He is dressed in a blue coat and light greyish blue vest with a light blue ascot with a golden decoration with a red stone on it. He has a dark grey moustache, green eyes and dark grey hair with lighter stripes. He also wears a golden ring in the shape of a mirror. He's also rather stout, at least in the stomach area, from the side.

Headmaster Grimm is the brother of Giles Grimm, and son of Mr. Grimm. The Brothers disagreed about the importance of following one's story, and Milton cast a babble spell on Giles, estranging the two. The spell was recently lifted by Apple White, Raven Queen, and their friends during the Thronecoming celebration. Since then, the brothers have reconciled. 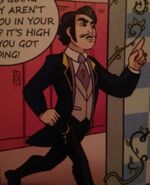