Professor Momma Bear is a staff member at Ever After High. She teaches Cooking Class-ic.

She is a bear, who wears a pink and white dress, and an apron with tea-cup-shaped details.

She is married to Poppa Bear and they have a child, Baby Bear.

During the Beauty Sleep Festival, Professor Momma Bear checks on Apple White and Raven Queen. The Storybook of Legends Momma Bear lets the students out of detention. The Unfairest of Them AllThings have gone topsy-turvy at Ever After High! After Faybelle Thorn casts a spell on the midterm hexams, the students find themselves unhexpectedly inside the wrong storybooks! When Rosabella Beauty and Cedar Wood find themselves in Goldilocks and the Three Bears instead of their own fairytale storybooks, they realize the trouble has only just started. Someone has been blowing down houses-and the whole forest is starting to panic. Now it's up to Rosabella, Cedar, and the Three Bears to solve the mystery and get this storybook back on script! Rosabella and the Three Bears

She, Poppa Bear and Baby Bear are inhabitants of the Dark Forest. Blondie invades his house to order food. Baking and Entering She and her family reappeared in Cerise's flashback, where she was exploring the Dark Forest and found the three bears complaining about Blondie. Driving Me Cuckoo She and her family attended the Dragon Games. Dragon Games 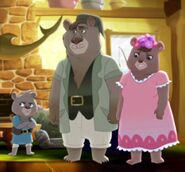