Ever After High Wiki
Register
Don't have an account?
Sign In
Advertisement
in: Characters, Females, Rebels,
and 2 more

Ashlynn Ella and Rosabella Beauty are two girls who love nature and animals as much as I do.

Nina Thumbell is a 2015-introduced and all-around character. She is the daughter of Thumbelina of the story by the same name, and she is a student at Ever After High. She is also part of Faybelle Thorn's cheerhexing squad. In the destiny conflict, she is on the Rebel side because of yet unrevealed reasons.

In English, Nina is voiced by Debi Derryberry.


In Latin American Spanish, she is voiced by Erika Ugalde.

Nina isn't the character who is judgmental or is prone to take charge of a situation. Though she is more of a go-along-get-along type of person, Nina speaks up when she has to. Nina believes recycling is important and encourages her friends to do it as well. She is as about as eco-friendly as Ashlynn Ella is.

Nina is at least a head shorter than everyone else in her team and she also has the ability to shrink and grow at will, but her natural height is no bigger than a thumb. She has pale flaxen-colored curly-wavy hair that is almost white, rosy red cheeks, dark brown skin, cute pale-pink lips and slate blue eyes. Her outfit incorporates colorful flora.

Nina is an environmentalist, meaning that she spends her time recycling, caring for the environment, and convincing others to participate. She is also part of the cheerhexing squad.

Nina considers Ashlynn Ella and Rosabella Beauty her best friends due to their love for nature. It appears she is friends with everyone on her cheerhexing team. She is roommates with Jillian Beanstalk.

Nina has stated in her profile that the idea of having a prince is "so last chapter". However, Nina has shown attraction to Hunter Huntsman in the book series.

She has a pet cat named Rascal.

Nina can shrink down as small as 2 inches. 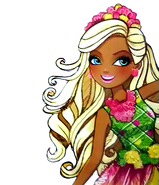 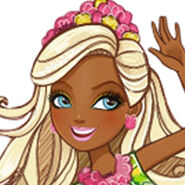