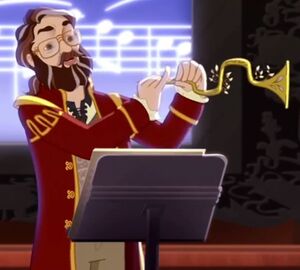 The Pied Piper is the protagonist and antagonist from "The Pied Piper of Hamelin". He is a music teacher at Ever After High, whose music summons rats from the sky.

The Pied Piper is voiced by Cam Clarke in English.

Professor Piper is a good-natured but gullible man. Revealed in Melody Piper's diary, he was quite the Rebel himself back when he had to live out his story. Instead of leading the rats that invaded Hamelin to drown to their deaths, he safely led them to the forests where they could live peacefully.

The Pied Piper has brown-toned and graying streaks of hair tied into a short ponytail at the back of his head, and his eyes are brown and he wears glasses.

Melody Piper is the Pied Piper's daughter. His father, the previous Pied Piper, appears in The Class of Classics.

When Cheshire Cat helps him, he promises that she will name his first daughter. The Class of Classics 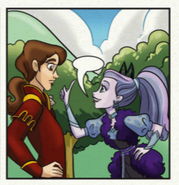