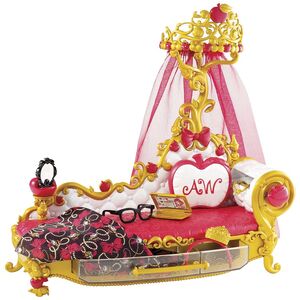 The first Ever After High dolls were released in July of 2013 and the first playsets joined them five months later in December. These were two pieces of furniture for Apple White and Raven Queen, which also happened to be the final doll items of 2013.

Big pieces: A large bed with several apple decorations, a red veil, a white side-pillow complete with a glasses compartment, a black blanket with apple embellishments, and a red apple pillow with Apple's initials on it. There is a translucent drawer to store the blanket underneath.
Small pieces: Black glasses, a playset-only necklace, a mirror and a laptop.
Notes: The Fainting Couch does not come with a doll, but 'Signature - Royals' Apple White, released in Early July, 2013, is the suggested match.

Big pieces: A desk with a bulletin board, desk lighting a decorated mirror and a chair.
Small pieces: A playset-only headpiece, match set lamps, lights and desk accessories.
Notes: The Destiny Vanity does not come with a doll, but 'Signature - Rebels' Raven Queen, released in Early July, 2013, is the suggested match.