The Queen of Hearts is one of the two royalties-on-duty of Wonderland and shares her power with the White Queen. Since the Evil Queen invaded Wonderland, the Queen was slowly poisoned and convinced into utter madness, even going as far as locking her daughter up in Card Castle due to her stress.[1]

In English she is voiced by Karen Strassman.

The Queen of Hearts is temperamental and pompous on a high level, yet loving and compassionate. She's shown this by ensuring that Lizzie had a great childhood.

In the books, the Queen is described to be born with a natural heart-shaped birth mark on her eye. She has frizzy red hair and a card-based regal gown. However in the cartoon the Queen has a heart-shaped beauty mark near her mouth and red heart eyebrows, and hair in the shape of heart buns.

Lizzie Hearts is her daughter. As for the King of Hearts, it is described that he is a rather miniature-sized man, however like the Queen, he also cares for his family.[2]

She spots Blondie Lockes and commands her soldiers to behead her. Thronecoming

The Queen's guards notify her of Alistair and Bunny trespassing on grounds. She lets them off with their final warning. Spring Unsprung The Queen of Hearts holds her birthday bash and meets Courtly Jester disguised as Lizzie who temporarily casts a spell to make her believe so. The real Lizzie appears and runs to her mother, who believes that what everyone says is the opposite. The real Lizzie is unaware that they're playing a game and discovers that what her mother's insults meant were actually compliments. Lizzie hugs her mother and warns her about Courtly's plot to dethrone her. The Queen's spell gets broken and she turns enraged, sending the card guards to search the castle grounds for Courtly. After entering the present room and finding that Courtly has been defeated by Raven Queen, the five girls are the additional guests of her birthday party. Way Too Wonderland

Ever After High (II)

The Queen of Hearts sets up a hedgehog selection for her daughter before her course at Ever After High starts. Lizzie Hearts and the Hedgehog's Hexcellent Adventure: A Little Shuffle Story The Queen of Hearts is seen lunching at Castleteria. Later she is seen at the Mad Hatter`s tea party. Class of Classics 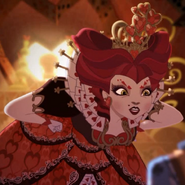 Retrieved from "https://everafterhigh.fandom.com/wiki/Queen_of_Hearts?oldid=103471"
Community content is available under CC-BY-SA unless otherwise noted.