Ever After High Wiki
Register
Don't have an account?
Sign In
Advertisement
in: Characters, Females, Rebels,
and 3 more
English

Raven Queen is a 2013-introduced and all-around character. She is 15 years old and is the main character. She is part of Snow White and the Seven Dwarfs as the next Evil Queen, and she is a student at Ever After High. In the destiny conflict, she is on the Rebel side. In fact, she technically is the founder of the Rebel movement, because it was her rejection of her destiny that inspired others. She dislikes this situation, however, because it makes the other students, Rebels, and uncertain Royals alike, come to her for guidance, which she cannot provide. Raven is not evil by any stretch of the definition like her mother and so playing the role of villain does not sit well with her. Nor does she enjoy the prospect of the punishment that she, as a villain, is destined to. Resolving only her own problem already takes a lot of her energy and as such, she cannot help others make their own personal decisions.

In English, Raven Queen is voiced by Erin Fitzgerald.

Contrary to popular belief at Ever After High, Raven Queen is not evil or even so much as mean. She is kind, smart, extremely loyal to her friends and considerate with a sarcastic side born from frustration over her unjust reputation. When people try to socialize with her, she is skeptical about their intentions, but not so much that it limits her ability to make new friends. Raven loves music, she is often seen with her headphones on and she plays the guitar, piano, and sings when no one is around. One of her most favorite artists is Tailor Quick.

Raven is not the first student to dislike where her story is taking her, but she is the only one in her class to take actions towards free will: starting with the small step of pursuing her love and talent for music, a subject usually reserved for good princesses.

Another of Raven's most prominent traits is her selflessness, as shown in the "Thronecoming" special. When forced to face the possibility that her decision to rebel may negatively affect her friends and the Fairytale World, she becomes insecure and questions her actions. Mired in guilt and self-doubt, she seeks answers from the wishing well, which presents a glimpse into a seemingly apocalyptic future caused by her rebellion (an illusion fashioned by Headmaster Milton Grimm). The vision rattles Raven and upon learning that her actions has "consequences" for the rest of the world, she is quick to renounce her previous convictions and conform to tradition despite her unchanged disdain for her destiny. This is significant, as she is previously shown not to care about the backlash or controversy stirred up by her rebellion. But when she discovers that others will possibly "suffer" for her disobedience, she voluntarily reverses her decision, confirming her selflessness and inherently good nature. Even Headmaster Grimm is aware of her true character, as he knew he could trick her into accepting her destiny if given a reason to believe the world's safety and stability was at risk.

Her "Magic Touch", is that she can cast spells.

Raven has long, wavy black hair with purple streaks tied into a single braid at the back and parted at the top to back room for her spiky tiara. She has violet, magenta and purple-maroon streaks in her black hair. Raven has pale skin and purple eyes. She has long, thick lashes, dark purple lipstick and light-purple eye shadow. Her eyelashes go into a wing at the end and so does her shadow. Raven wears a black and purple dress with a silver shoulder-pad-for-sleeves holder with silver feathered sleeves and a high, feathery collar and a purple pendant in the middle; her dress also has a chain, belt-like accessory around the waist, she wears fishnet stockings and open-toed short-wedged-high-heeled boots with buckles and an opening in the backs for shoes.

Raven Queen is the daughter of the Evil Queen from Snow White and the Seven Dwarfs, but also a daughter of the Good King. According to "Raven Queen's Story", Raven and her mother have a strained relationship, though they did share several happy memories when Raven was younger. She does miss her mother, though.[1] The Evil Queen is currently locked up in mirror prison and often speaks badly about Raven's father, the Good King, whom she considers spineless and pathetic. The Storybook of Legends This angers Raven, as she has a good relationship with her father. Raven has no mentioned cousins or siblings. Raven's mother wanted to escape from Mirror Prison, and the Evil Queen tried to trick Raven into getting supplies that could set her free in The Unfairest of Them All, along with Raven's possible relative Apple White.[1] Specifically, they were gathering a will o' the wisps, a dragon skull, a giant's hair, and an arrow,[1] but there was one thing added: the egg of the Chicken Hut of Baba Yaga. The Unfairest of Them All

According to The Storybook of Legends[2], the Evil Queen is the stepmother of Snow White in the original story. Even though no confirmation has been made that the current Evil Queen, Snow White, Apple and herself are related, which possibly means the original bloodlines have strayed so far apart from that little to no relation is there at all.

Raven is best friends with Madeline Hatter, who originally was going to be her roommate until Apple White requested that she be roommates with Raven instead[3][4]. At first, Raven and Apple weren't friends, although they attempted to be on friendly terms at least. The destiny conflict often kept them at odds. Though in "Way Too Wonderland", Apple admits that Raven's heart is too good for evil, so she should be free to write her own destiny, meaning that they've worked things out. They are now very close friends. Raven is also close friends with Cedar Wood and Cerise Hood and has been in friendly terms with Dexter Charming from the start, even calling him a friend. She also gets along quite well with Ashlynn Ella, Briar Beauty, Kitty Cheshire, Ginger Breadhouse and Lizzie Hearts. The Storybook of Legends has the same story as "Apple's Tale: The Story of a Royal" and "Raven's Tale: The Story of a Rebel" where Apple requests to be roommates with Raven, only a little differently than what was shown in the webisodes.

As a child, Raven had a puppy named Prince, but her mother turned it into a bone rat. During Legacy Year, Raven acquires a dragon named Nevermore.[2] Daring Charming tried to slay her, but Raven stopped him with her magic.[2]

Raven's priority in life is where her story is and should be going, which leaves no energy or time to spend on dating. Dexter Charming has a crush on her, but she is oblivious to this. In "True Hearts Day", Dexter expresses his liking for her through a poem and she eventually figures out that he wrote it. However, at one point Raven believes that Daring is the one who wrote it but only briefly develops feelings for him. In "Cupid Comes Clean... Kinda", it is shown that the Raven and Dexter have mutual feelings for each other. Then, in "Chosen with Care" she got asked out on a date by him and said yes. In "Just Sweet", Raven expressed her excitement for Dexter asking her out at last, which might indicate that she was waiting for him to ask her out on a date. In "Date Night", she and Dexter go on their first date to the movies. Dexter expressed worried concern for her "Way Too Wonderland" and hugged her when he finally found her, acting very excited about it. According to Truth or Hair, Raven and Dexter were spotted having dinner together at the Green Bean Garden in Book End. In Cerise and the Beast, Dexter asks Raven out on a date to the movies again, and she says yes.

Raven can conjure up incredible hexes, enchantments & spells just like her mother. She can not only use transformations & teleportation but she can break curses as well. After signing the Storybook of Legends in "Way Too Wonderland", the book lends her the full powers of the Evil Queen role, so it can be assumed that Raven is capable of the same magic as her mother (i.e. vortex creation and master hexes). She has yet to display those powers but so far, she is shown to levitate objects, create energy blasts, and even freeze time. Her magic manifests as lavender/deep purple fire and like actual fire, it has the tendency to spread quickly and get out of control if not properly contained. Even so, it has not been confirmed if Raven actually has fire-based abilities. The closest indication comes in "Dragon Games", when she uses a lava imitation spell to heat up the dragon eggs. However, it's not clear if the caster needs heat magic to perform the spell, or if any sorcerer with ample knowledge can cast it.

Although she is not evil by any extent of the word, Raven possesses dark magic. As the next Evil Queen, her role comes with the ability to summon dark creatures so that good princesses may call on woodland creatures. Despite her good nature, her magic is prone to outbursts that can unintentionally negatively affect her surroundings. In the cartoon, something as minor as a sneeze wilts a flower, and in the book series, Raven accidentally transforms a group of songbirds into slithering snakes. Anger seems to amplify her magic, and when spellcasting, it has the potential to distort the intended effect of her spells. 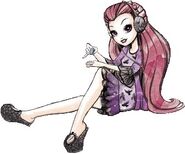 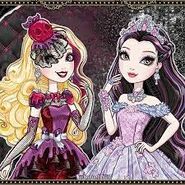 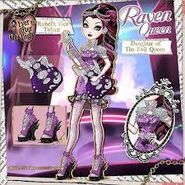 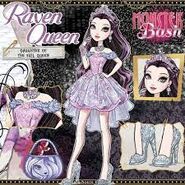