The Royals of Ever After High are the future fairytale characters who stand for adherence to tradition and piety to destiny. Not too surprisingly, most of them have a pleasant future laid out for them. Nearly all of them are royalty and most have a Happily Ever After ahead. The Royals oppose the Rebels, who seek to break open the system and inject choice, regardless of the consequences this may have for those who do want their destiny and are dependent on others adhering to theirs to get it. The Royals hold a grudge against the Rebels, after they didn't willingly sign during Legacy Day. The symbol of the Royals is a golden crown which is somewhat fitting because most of them are Royalty.

The dark side of the Royals is also shown and have been proven multiple times already, as there are few Royal students that feels like disowning their destinies, facing huge and serious debts, problems, issues with their stories like Briar Beauty and Ashlynn Ella. According to Briar, she doesn't want to follow her destiny by sleeping for 100 years, while Ashlynn's side is questionable since she has a boyfriend named, Hunter Huntsman who is a Rebel. Duchess Swan is destined to be a tragic heroine which is a problem in her destiny, as a result she lacks her Happily Ever After like most princesses have, she tries to change her fate with other princesses, but so far she hasn't yet. Lizzie Hearts, also doesn't like some parts of her destiny like shouting and yelling alot since it ruins her voice and hurts her throat. Blondie Lockes, is also too scared to tell some of the people in the Royal crowd that her family isn't distantly Royal and her roots are too far from Royalty.

For generations, the well-protected sentiment in the world of Ever After was that everyone had to take over the fairytale role of someone from the previous generation, primarily of one of their parents. This system, while more beneficial to some than to others, was agreed upon as necessary to protect the fairytale world, which will disappear if the fairytales aren't relived. Theoretically, within this system, everyone is equally important, but the reality is that fairytale and role do influence social position.

Over time, numerous youngsters—Ever After High students since 1812—have questioned their obligation to sign the Storybook of Legends and follow in their parents' footsteps, but few have openly done anything about it. The most significant example of this is the refusal of Bella Sister to sign. What happened to her and her sister Brutta is unclear. Their story became forgotten, but whether the Sisters themselves disappeared with it is a mystery. The only thing for certain is that no one heard of them ever again, which might well have been their intent.

Undaunted by this, a later generation started a grand-scale uprising. Led by Raven Queen, many students openly began opposing their destinies and declared themselves Rebels in the process. In the face of this threat, other students, led by Apple White, rose up to defend tradition as well as their very lives. They declared themselves Royals, as most of them are royalty whose favorable position within the system does not prompt any personal dilemma among them.

The first round within the Royals vs. Rebels conflict was lost by the Royals. On Legacy Day, the day Raven, Apple, and many of their peers were to sign the Storybook of Legends, Raven refused. Since then, Royal and Rebel relations have been strained.

On top of the conflict with the Rebels, the Royal in-crowd isn't entirely one-minded either. For instance, Briar Beauty is not looking forward to a century-long sleep and has expressed Rebel sympathies in wishing for another destiny, before deciding completely she wasn't going to sign. Duchess Swan's story does not include a Happily Ever After and her interest in Daring Charming seems related to changing that. And Ashlynn Ella likes her destiny but does not want any other "Prince Charming" than Hunter Huntsman, a mere huntsman of another fairytale.

The general sentiment in Ever After favors the Royals. Outspoken supporters of the Royals are the female narrator and Milton Grimm, who is the headmaster of Ever After High. 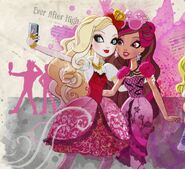