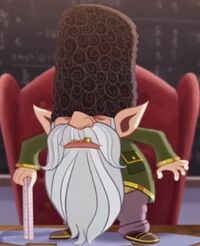 Rumpelstiltskin is a magic-wielding Russian imp who acts both as donor and antagonist in the fairytale carrying his name. He is a Science and Sorcery teacher at Ever After High and associated with the students who face a destiny as quirky characters. He is also the owner of vintage Imperial Gold Turntables.

In English, Rumpelstiltskin is voiced by Audu Paden.


In Latin American Spanish, he is voiced by Javier Loyo.

Professor Rumpelstiltskin is the quintessential mean teacher. Each year, he sets up a test after only a few classes that covers way more than the students could have learned. When the students fail and thus need extra credit, he has them spin gold for him. He also has a tendency to laugh at his own cruelty. Despite the story Rumpelstiltskin being a German story by the Brothers Grimm originally, he appears to be Russian since he uses the term of the use of the word "da" for yes.

He is a short man with large, pointy ears, light skin, bad yellow teeth, and a face hidden behind a long white beard and a large black hat. He wears a green coat and gray pants. He always carries around a ruler.

When the Candy Witch was a student she and Rumpelstiltskin dated once. 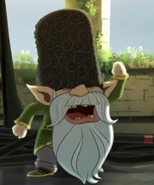