Ever After High Wiki
Register
Don't have an account?
Sign In
Advertisement
in: Characters, Epic Winter characters, Males,
and 3 more

The Snow King is the Winter King, who lives in an ice castle on the top of the world. He has a great influence in the "Epic Winter" movie.

The Snow King is kind and loving father and husband. He loves fun and ice hockey but is very responsible when it comes to his job as a King. Due to Jackie Frost and North Wind, he became a cold man, literally, who could only see evil. Thanks to Crystal and her friends, he's back to normal.

He has blonde and grey hair, beard and a moustache, and he has blue eyes. He is tall and a strong built man. He carries around an ice staff and he wears robes with white fur.

He is Crystal Winter's father and the husband of The Snow Queen.

He is related to the story "The Snow Queen" and the story Beauty and the Beast as The Enchantress. 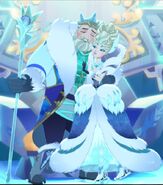