Sparrow Hood is a 2013-introduced and all-around character. He is part of Robin Hood as the next Robin Hood, and he is a student at Ever After High. In the destiny conflict, he is on the Rebel side because he'd rather have his face on a concert poster than on a wanted poster. As the leader of the Merry Men, this is not an easy goal for Sparrow. While some of them are Rebels too, others are Royals - a situation that divides the group of otherwise close friends who look up to Sparrow.

Sparrow is the kind of person who likes be stuped but prefers to limit his ties. He is a charmer, able to catch the interest of many girls, but usually not interested in keeping a hold on it. As befitting his destiny, Sparrow is a practiced thief and conman. Nonetheless, he has little interest in his prewritten future, as he'd rather be a musician. He is a skilled singer and guitarist.

He has light skin, olive green eyes, red hair and a soul patch. His style reflects his rocker influences through studded and buckled accessories and piercings in both ears. In the book series by Suzanne Selfors, he is said to have chestnut brown hair instead, meaning that the books and the cartoon series may or may not take place in two different divided universes, or just may have a different appearance in the book series.

One of Sparrow's favorite (or only) interests appears to be playing the guitar. In Next Top Villain, Sparrow was shown to have an interest in gold, just like his father.

Sparrow is the son of Robin Hood and Maid Marian, who Maid Marian is a teacher at Ever After High. Cerise mentions that she and he are distantly related because they share the same last name in The Unfairest of Them All.[1]

Sparrow is the leader of his 'band of merry men' and he's friend with Tucker, son of Friar Tuck. Though their friendship is good, the members of the group do not stand unanimously on the same side in the Royal vs Rebel conflict. Sparrow is also friends with Duchess Swan, even though their relationship sometimes has negative consequences. Sparrow is friends with most princes at Ever After High as well, such as Hopper Croakington II.

Sparrow possibly has a snake as a pet or weasel, though nothing has been mentioned or confirmed.

In Poppy O'Hair's profile, she has a crush on Sparrow, but in Truth or Hair, she says she doesn't.

He also expressed interest in Bunny Blanc, but after Alistair said they were together he never mentioned it again.

Sparrow wears a feathered green felt cap like his father did. He wears a studded leather jacket over a black shirt. Sparrow accessorizes with a green kerchief around his neck, along with studded gloves and a gold pendant.

Sparrow wears a several-studded suit with a small navy blue button-up vest inside. Under it he wears a midnight blue shirt with a green tie. He accessorizes with a dark fedora hat with a snakeskin band and a small pin in the shape of a serpent. 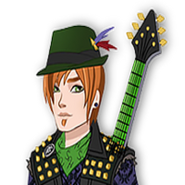 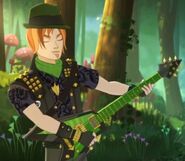 Retrieved from "https://everafterhigh.fandom.com/wiki/Sparrow_Hood?oldid=103737"
Community content is available under CC-BY-SA unless otherwise noted.