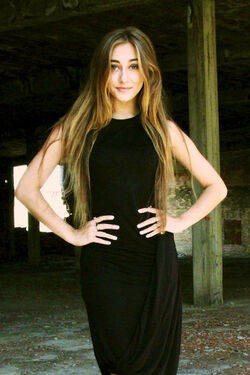 Stevie Dore is lead dancer of the Ever After High music video. She acts as the senior mentor of the new Royal and Rebel students who are joining.

Stevie has been dancing ever since she was 2, making that 18 years in both the competitive and performing fields. She has performed on shows like X Factor and starred in "Just Dance Kids 3". She also was a dancer in Cody Simpson's "Pretty Brown Eyes" music video. Stevie also has a singing career, but is mostly known for her dancing. She has won several soloist awards and dances several styles. In most of her dance performances or competitions she either dances contemporary or ballet. She also choreographs her own contemporary dances. On occasions she attends photoshoots.

Stevie goes to school in Bay City, All Saints Catholic High School;[1] but she continues dancing in notable regions around America like Los Angeles. She keeps in touch with both her fans and friends through her social media websites.

Retrieved from "https://everafterhigh.fandom.com/wiki/Stevie_Dore?oldid=65339"
Community content is available under CC-BY-SA unless otherwise noted.