The Storybook of Legends (object) 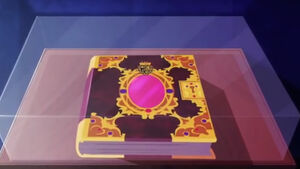 The Storybook of Legends is an ancient artifact kept for centuries, used as a signing book for the masses of fairytale entities to seal in their destinies, pledging to live out their stories and comply with the laws of the Fairytale World. Capabilities of said artifact include signing a name in place of another, making legacy theft able.

For centuries, the Storybook of Legends has been used as a traditional method to signify the agreement on following their destiny. The book was kept under the Brothers Grimm's supervision at all times, however, this didn't stop the Evil Queen, who planned on taking over the other fairy tales. She was able to steal the Storybook of Legends and keep it hidden for years, under the rug of what used to be her dorm room at Ever After High, hidden under the floor tiles and sealed with a magic spell.

Fast forward to the present, where second-year student Raven Queen is hesitant on following her destiny and even has suggestions which are unimaginable, as she does not want to follow in the footsteps of her mother, the Evil Queen. A majority of the students at Ever After High agree with Raven - that people should be able to choose their own legacies. They are people who believe that nothing should be predetermined, calling themselves Rebels. Of course, the remaining students who disagree with Raven's actions are called Royals. Most of them are happy with the destinies that they already have, who claim that change is unnecessary. The Royals are led by Apple White, a royal enthusiast who struggles to find the proper meaning behind Raven's reasons.

At the time of Legacy Day where students are required to officially pledge their agreement to follow the destinies, Raven rises against the laws of destiny and slams the Storybook of Legends shut; publicly refusing to follow her destiny. The Tale of Legacy Day

Further, in the year, the headmaster has plans for Raven to sign the Storybook of Legends at the time of Thronecoming. With the help of his secretary, they achieve their goals and convince Raven into signing, however, discover that the Storybook of Legends was a fake all along, the real copy believed to be in the hands of the Evil Queen herself. Briar Beauty continues the investigation of the missing Storybook of Legends, soon finding it under the floorboards of her dorm room which was previously the Evil Queen's, shared with Red Riding Hood. Unsure of her destiny herself, Briar takes the real copy with her and throws it down a well in the Enchanted Forest, unknowingly sending it to Wonderland. Thronecoming

Months after, Lizzie Hearts gets a birthday invitation from her mother. As there is a barrier between the worlds, she is unable to attend. Still, on the search for the Storybook of Legends, the students call on the help of Raven to magically transport them to Wonderland, in addition to attending the Queen of Hearts' birthday. The students end up in Wonderland High where they meet Courtly Jester, a power-hungry dictator that plans on dethroning the Queen of Hearts and stealing Lizzie's destiny using the Storybook of Legends, that is no longer in the Cheshire Cat's possession, as she wrapped it as a present to the Queen of Hearts, by signing her name in Lizzie's place. The Evil Queen lends Courtly her spell book and magic, which she uses to battle against Raven with. Apple manages to get her hands on the Storybook, giving it to Raven to sign for the sake of inheriting her mother's powers to defeat Courtly. After being engulfed by the evil powers and stripping Courtly of the magic, Raven returns back to normal and uses her powers to lift the curse between Wonderland and Ever After. After finding out that the Storybook is no longer a safe artifact, Raven decides on giving the pages to each and every individual, giving them the free choice on either following or writing a new destiny for themselves. Way Too Wonderland

Raven's powers that were given to her by the book are making her popularity go up, as she is finally completely able to use her magic like a true sorceress. Dragon Games

The Storybook of Legends is a hardcover book with pages containing the stories and the students taking up the roles of the characters in the fairy tale. A small signature box is left on the bottom right corner of each page, for the specific student to sign. Some pages from major fairy tales are displayed by the headmaster's office, taken from the Storybook of Legends.[1] Physically, the book is maroon-colored with golden embellishments on each corner. There is a shiny mirror-like compartment in the center front cover of the book, along with a keyhole with a magical key required to open the book for signing. The crest of Ever After is embedded on the top, above the mirror. The magical key appears once a student pledges, and the Storybook flips itself to the page of the signer. A quill also appears for the stage of signing.