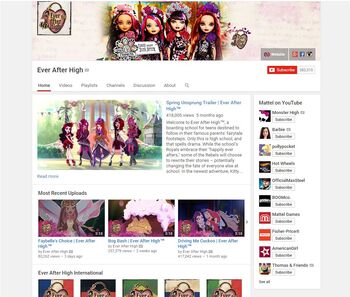 On May 30, 2013, the first three webisodes of the cartoon series were uploaded, introducing the main function of the YouTube account: an accessible location for people to watch and rewatch Ever After High webisodes. They are also uploaded on the the main website, but in slightly lower quality.

Since Chapter 3, the Ever After High YouTube Channel started uploading webisodes and original content biweekly on Fridays.